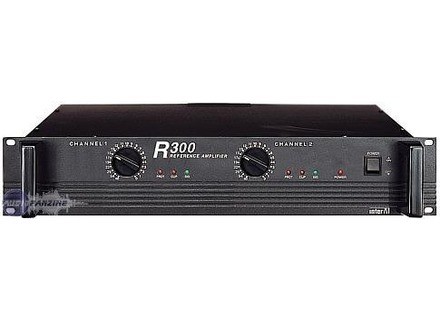 Dubea's review (This content has been automatically translated from French)

Inter-M R300
4
I use it for 2 years and also know the old model that is used for some time and these amps are very tough, they have no ventilation and radiator heats a lot when used at full power, it loses a little momentum but will.
Its price has dropped and has a good value for money. If you are likely to need more power to you facing a R500.
These models have been replaced by R. ..- Plus with similar characteristics.

iskemis's review (This content has been automatically translated from French)

Inter-M R300
5
I use two of these amplifiers to the speakers monobridge Gemini GX400 and I am very satisfied, I agree on the small drop in power when they have turned it for several hours, but we have problem is solved by setting PC fan directly on the back of the amp. The result is more than satisfactory and the amps are cold even after a whole evening, and there shall be more loss of power! Short story: one of our amp had a fall of more than 2m .... it works perfectly, I assure you it's rib, but was afraid

djkiwi's review (This content has been automatically translated from French)

Inter-M R300
5
I have this amp for some weeks ... no worries. I use it with speakers .. Truth B2030P
notched button for each channel!!
for me, very good equipment!! I adore easy to use good value for money, over 100 watts for 20 euros more than the R150 ...
j j I hesitate to admit another amp saw the reviews, I prefer a solid.
Did you find this review helpful?yesno
»

picvert's review (This content has been automatically translated from French)

+: Powerful, cheap, solid, ribbed pots, jack and XLR inputs, Speakon and output terminals
-: For our use, there are no worries. Heat a little but nothing abnormal.

Had not tried other models before, except HiFi amps. And someone in the group was the same for assembly at home and no more worries.
Now I know there are other amps at the same price as Samson servo 260. Users seem satisfied, but I can not have a comparison after leaving posts on the forums, so ... (actually if it's the same on the inside so it's the strength of Inter-M that makes the difference, rather than appearance)

The best buy in our budget, probably again today.

to note, because there are 8 more (under breath, restitution straighter, heat), but much more expensive ...
Did you find this review helpful?yesno
»
Read the 6 user reviews on the Inter-M R300 »