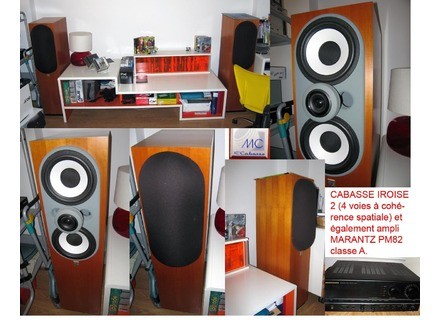 Marantz PM-82 MKII
4
Connects two different pairs of HP, powerful enough to power large columns or speakers to the average yield is an amp "round" full and dynamic but not at all aggressive, making it an ideal companion to pregnant very detailed and defined. In fact it allows it to fit almost any type of HP, YAMAHA NS10 Cabasse up big.

It is a pure audiophile Stereo amp in class A, with a big beefy power supply. Its use is also a musical studio amp very relevant. It weighs about 20kg, relatively little heating.

Construction hyper well finished, simply mail (proof of quality audio, the more complicated, in general, unless the sound is good) and quality components (just look at the big power supply or condos and huge influence on the beast to be convinced).

New price in € 1200 (at the time, in 1997 but hey, it gives an idea, especially in Stereo is far from being the latest model released on better ... far from it necessary). Rare on the second hand market.
Did you find this review helpful?yesno
»