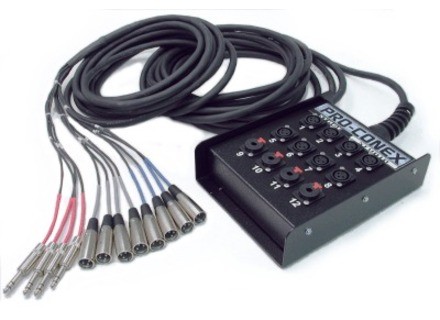 Hosa SH 12X4 Pro Conex Snake
5
Hosa's SH 12x4 Pro Conex Snake is a simple connection box designed for use in the recording studio or for a live sound reinforcement rig. I've used this in a recording studio where we ran this through the wall into the live room from our control room. This is in one of the smaller studios on site, so we don't need all that many connections in between the live room and the control room. I don't know if this comes in multiple lengths, but the one that we've got is a 100 foot one, even though we don't need nearly that much slack. If you are going to use this in the recording studio, I'd recommend going with a shorter one if they do have one, as this length is really designed for using this in a live setting. The connections that this has include eight XLR inputs and four dual 1/4" and XLR inputs, the latter of which are 1/4" on the opposite end. I do believe that the Pro Conex series of snakes comes in all shapes and sizes, so you should be able to get any number of different connections on a snake like this if you aren't interested in this exact make up. Hosa in general does really good work with their snakes and cables, and there is no exception here with this snake. It's built very well and should last a pretty long time, especially if you're using it within the confines of a recording studio and not for live sound. All of the jacks on both ends are definitely made of good quality, as you can just feel it when you plug something into it. The 'snake' portion of the cable is tightly wrapped and shouldn't get in the way too much. The Hosa SH 12x4 Pro Conex Snake is a very solid snake that should do the job as well as any other...
Did you find this review helpful?yesno
»