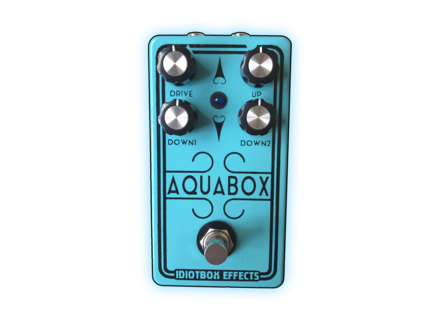 The Aquabox can sound heavy to downright massive, although it depends how far you want to push any of the octave controls and the Drive. The drive is very organic and raw sounding, and so it needs to be coordinated with a clean channel/amp or definitely an amp that is very low gain. This is important to realize since there is no volume unless you turn up the drive to some extent, e.g., quarter-way; and so, if you like the distortion of your amp or other pedals, the Aquabox will not be your cup of tea. But if you want to add a different slap-in-your-face tone with some gnarly octave layering that can turn a clean (or slightly driven) amp into a death metal box of rock, then the Aquabox will fill that quota in spades. The Drive can be used alone and without any Octave, but what fun is there in that? Adding any octave voicing will increase the output volume, and some tweaking is required with your amp or guitar volume knob. All three octave knobs can be very subtle to big and powerful. The Octave Up seems to make the Drive cut through the mix more, and you can add a little (barely audible) or a lot. The Octave Down and the Two-Octaves Down knobs produce a lot of bottom end, which sound pretty huge with a six-string guitar, but massive with a 7-8 stringer or a bass.

OVERALL IMPRESSION:
If you combine the colors blue and green you get aqua. In effect, the Aquabox is a combination of MXR’s Blue Box and Green Ringer circuits. However, the overall result is superior as you get some heavy distortion while being able to tweak the degree of mix among three added octave controls (one octave up, one octave down and two octaves down). As a result of mixing this blue with green you get aqua, or the Aquabox. When initially seeing this pedal I thought it might be a chorus or something shimmery (watery) with such a name, then quickly understood why it was called the Aquabox and by combining the best elements of two other well-known pedals. At $129 USD the price is very reasonable and the epdal extremely fun to use. You may be limited by the Drive’s tone (it’s very overpowering for use with other drives or distortions), but once you start riffing some Death Metal barre chords you will understand the marriage between the Octaves and the nature of this Drive. Very ‘heavy stoner’ sounding.

GENERAL USE:
Each of the four controls affects a different parameter, but all four control volume as well. There is a Drive knob, which produces thick distortion-type fuzz (it’s not fizzy and it’s not exactly a fuzz, but the demo will clarify that).

You do need some Drive in order to hear the signal and it is fairly thick and fat sounding even when turned up a little – I doubt many would use the Drive full bore. There are three other knobs that control the Octaves. The UP knob controls one octave up and how much you hear that octave (the more you turn it up, the more it is in the mix). The DOWN1 knob does the same, but one octave down from what you’re playing. And the DOWN2 knob does likewise, but two octaves down. Now, the more you turn up any one of those knobs, the louder the signal becomes and the more apparent the effect. Let’s suppose you had the Drive at 12-noon, the Octave Up at 3-o’clock, the Octave Down at 12-noon and the Two-Octaves Down at 9-o’clock: if the volume was perfect for your playing and you decided you wanted to have less Octave Up, then your volume would drop slightly. This is not a big deal, but you may need to adjust your guitar or amp’s volume control to compensate. Another option is to increase the Drive slightly if you turn one of the Octave knobs down or vice versa. The one thing I would change with this pedal is the ability to use the Octave knobs independent of the Drive – that way you could use that tone of the pedal’s Drive if desired, but also use the Octave controls with a different amp/distortion tone.

OTHER DETAILS:
The Aquabox guts are encased in a 125B solid steel chassis and is of a standard pedal size, measuring approx. 122 x 62 mm (4.7 x 2.6 inches). The paint is a good quality in an obvious shade of Aqua and it has a nice blue LED ‘on’ light to match. The four control knobs and their pots are of high quality and smooth when turned. The foot switch produces a solid click under foot while remaining noiseless in the signal when switching on-and-off. The footswitch also is far removed enough from the control knobs that damage should not occur when stomping vigorously; nonetheless, the knobs are of solid construction and will take some abuse. Both input and output are located in the back, whereas the power input is located along the right side and next to the footswitch (some modest care needs to be taken, although it is set lower toward the base). The Aquabox pedal accepts a 9V battery or it can be powered by a standard 9V DC ‘center negative’ 2.1mm BOSS style input while drawing a paltry 6mA.
Did you find this review helpful?yesno
»