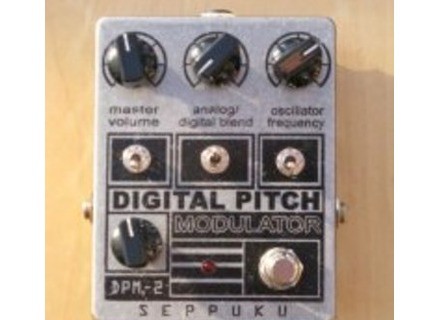 It's a good old pedal with a metal box that connects with a jack input, one output jack and is powered with a 9V power supply standard boss. So far, nothing strange.

The knobs on mine are red. It's beautiful. The knobs is easy to know what they are is written underneath. Switches is not written and it is difficult to predict what will happen when touched because it depends on how the knobs are set ... As my daughter would say "Dad, it changes the sound."

Basically, it is a typical germanium fuzz coupled with a ring modulator, a digital dégradeur an octaver and a filter. Basically it is impossible to describe the sound it without comparing it to a pedal of the same type does not exist. Imagine a double muff or germanium OD coupled to an 8-bit and you get an idea of ​​its digital degrader. Almost.

The configuration is all that is easier but it's like a fuzz-Z Vez is not easy to predict what will happen when you touch a button or turn a knob ...

I especially like the button / analog digital mixing it helps to have either 8-bit or typed amiga the fuzz limit on each side or a particularly interesting hybrid sound.

I think it's in my effects chain. I do not use it all the time but he is not ready to leave, it replaces a double muff and a ring thing in a small format and the sound is so special that I'm not likely to hear someone one having the same.

I've had two months, I love it, this is exactly what I wanted.

From there to advise you, uh ... Try it before, really.
See the source
Did you find this review helpful?yesno
Cookies help us improve performance, enhance user experience and deliver our services. By using our services, you agree to our use of cookies. Find out more.