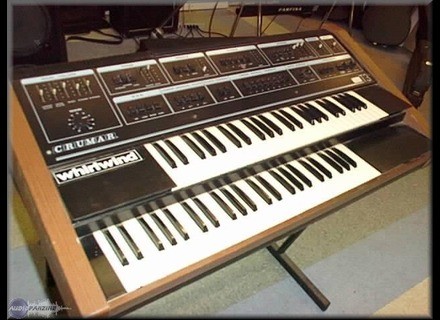 Tony Steel's review"The future of vintage sound is in your hands."

Crumar T3
4
A rare piece of gear, not an easy one to find.
If you chance to see one for sale, don't miss the opportunity to try it - and to try it is to love it instantly.

It's a 3-in-1 in the same series as Trilogy, but more of an organ. 2 keaboards of 4 octaves each.

First the organs:
They're split in 2 parts:
- the upper keyboard has 8 presets, ranked from the softest to the brightest. Endowed with auto sustain and a percussion set (nothing to do with drummers, we're talking organ percs here, of course) which decay and volume can be controlled - a real plus that offers nice possibilities.

- the lower keyboard has 4 timbre controls (8, 5.1/3, 4, 2.1/3), like a simplified Hammond.
Crumar called that part Lower manual Flute. Not much to do with a flute soundwise, rather soft, flutty organ sounds I'd say. Really beautiful.

- Both these organs can be routed to a slow-fast rotor effect simulation. Independant. Just superb. And a a bonus, there's an analog reverb which doesn't look like much but always sounds pleasant.
Plus, the lower and upper keyboards can be muted separately to leave room for the following...

Then the pianos :
3 nuances of electric pianos can be superposed. They remind me of a RMI electra harp, as I can hear on good old Genesis records I love so much. They can be affected to either or both keyboards. The finest is that back then, its conceptors thought of the possibility to route it towards a good old analog phaser. Bliss! Finally, I can get these Tony Banks, Genesis atmospheres.

Finally a smaller String machine section:
More sober, a little different from that I knew on Trilogy. Just an octave control and a possibility to affect it to both keyboards. But iot can also get through the phaser if you want. Bliss, again... A real enjoyment.

Options:
The T3 can be comptemented with a 13-note key/pedalboard. A 4th bass part was designed for such.
Since I don't own the pedalboard, I can't judge it. I believe it to be impossible to find now.

Another option. The faaaaaaaamous -and worthless- sequencer/arranger. I have it... well, too bad! I don't use it, I hate those things.


Cons:
Ooch ! This is where I feel I made a mistake buying it.
- Of course it's cumbersome and heavy. 31Kg, 109x63x26... Ooch! sh..., my back! To be used with a RTX stand, or something sturdy anyway.
- its body. While my Trilogy looked in a good state, the T3 one looks like it fell at sea or something.
The paint goes away, replaced by rust. It looks like a drowning Russian nuclear submarine.
- the electronics, as sh*tty as on all Crumar from this period. Push buttons looking on the verge of breaking, faders and knobs that spit as if out of a nursing home...
- wooden flanks in laminated wood that stick out - and impossible to remove. Completely messed up by the thing's weight.
-the keyboards are trustworthy, but too light at touch and sensitive. The lightest touch and you're in for a wrong note.

In brief.
The instrument is too heavy and cumbersome, hence impossible to sell for the price it would deserve.
Mine was for sale 30km (20 miles) from my home. It was on sale for a year on a classified ads website for a year, meaning no one wanted to pay more than its value to have it transported professionally (€250).

Still, it's not worse than a Hammond or Farfisa. At least, this one can enter your car.
A lot of work to restore it. Plenty of work ahead.
Not to be put in the hands of a non-handy(wo)man. It sure would stay rotting in the basement.

But it's only happiness when its sound aims for your ears alignmed with the speakers.

Keep it safe in a dry place and take time to play with it. Let it take you 30 years back. The future of vintage sound is in your hands.
Did you find this review helpful?yesno
»