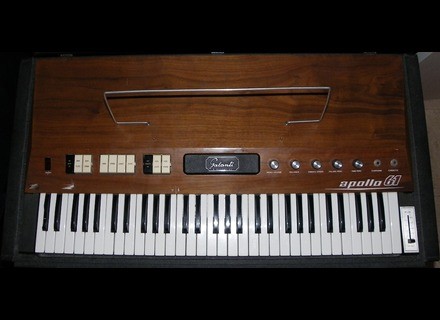 Guillaume1979's review (This content has been automatically translated from French)" Come on baby light my organ and try to set fire in my ears!!"

Galanti Apollo 61
5
Keyboard 61 keys divided into 2 zones 2 and 3 octaves
A headphone jack, a line out, between one to connect a volume pedal, an enterprise called the "cassette".
1 Button Bass On / Off to activate a monophonic bass sound on the first 2 octaves
2 buttons and Bass Flute Bass Strings (bass harmonics) for the entire keyboard
4 buttons Horn, Strings, Horn, Flute (treble harmonics) for the entire keyboard
1 Button Vibrato On / OFF to turn
2 buttons (Perc Perc Flute and Strings) to activate the sounds of percussions (organ sounds with quick release)

An encoder to the "volume pedal (low sound level)
A rotary "balance" to equilibrate the volume between the low and the other buttons of harmonics)
A rotary "Vibrato Speed"
A rotary volume received: "Perc Volume"
An encoder to sustain the perceived: "Time"
And finally a knob for linear rverb. And yes there is a clear rverb the interior

On the interior, there is an adjustable resistance for the gain of prampli and can also give sparment the 12 notes that make up each octave.
Finally there is a lamp in the volume pedal ... People Are Strange

You plug, turn you on, you play

and yes it is very good, good sound cheezy
Cons by the sound through the HP intgr and one on the headphone or line out have nothing to see.
In line out / headphone sound was just very cheezy, with harmonics in the upper medium very bright.
On the HP is much lower in the mid and presents very well and pchu.
In my opinion to make a good sound that could make it stereo, it's a SM57 on the left speaker in the mix and the live line out right (not really about the need guitar amplifier or other device warms to the sound (it warms itself in the machine

Most: rverb which can be used to enter the FX Grace K7. The lower left hand really pchu, and the organ sound is really very nice.
Attention all the same, like any organ a little cheap in this era, the background noise of the harmonics is gnrateurs presents ...

It is a sound crazy if it costs too long, the sound when the tone, you feel all weird ...

I put a 9 because the game amplification / noise ... is more strongly actualit and does not compete with competitors of the era (Vox, Farfisa and Orla especially since I has a `)

Very happy to have a home
It is a rare instrument which has a color really share (fairly close to a Farfisa or Plutt a vox jaguar, but a little bit more gentle ... may be ...) Nothing to see with my other organs if not.