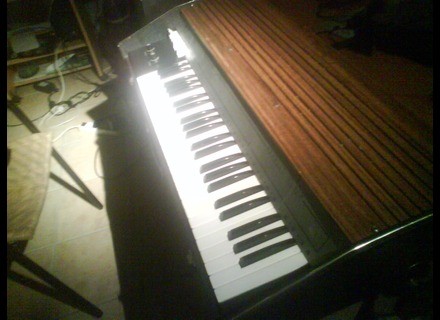 valskater's review (This content has been automatically translated from French)" Resurrected old cuckoo!"

General Organ 49 P
4
- Organ electronic (analog), 4 octaves.
- 7 switches ON / OFF activation of different harmonics (like Farfisa) with a look of drawbars, BUT THEY ARE AS SWITCHES!
- Knob OFF / ON + Volume (0-10) (you turn the voume, it turns off the organ)
- Knob OFF / ON + Vibrato (0-10)
- Polyphony TOTAL
- Jack Foot Volume / Expression (Jack)
- AUX
- Headphone Jack
- The interior layout of screws to tune each note, each time on all the octaves together.
- Foot-dependent, but removable

Bracher-on, turn on your switches, vibrato (if you want), volume, and play!

Its super vintage, a sort of hybrid between a Farfisa and Vox Continental Pro.
If I tell you: The Doors, IIron Butterfly, The Animals ... well, that's it!
With age, there is a little breathless, but that's okay.
Vibrato, great as it is adjustable!
The 7 switches can have a fat or a shrill sound, passing between the two.

It is an organ, so the touch is very light.

We can dub this instrument on an amp (although that has a speakerphone internal), while adding effects pedals between: for my part, I have a nice little distortion on a guitar amp, and add a Wah-Wah VOX between the organ and the amp. The result is psychedelic!!

I use it for more than six months, I think I used the instrument itself, but I have fun adding effects pedals just to see what happens ^ ^

To tell you, it's a friend who rid his attic which yarn to me, otherwise he would have thrown out! (:-O Blasphemy !!!!!!) The organ was pretty messed up, especially in sound and button (which sounded a DO instead of an FA .... luckily I found these famous screw tuning ^ ^), there were keys that were still depressed, but simply remove a few screws, release the buttons or add springs, and go!

It dates from 1962.
Did you find this review helpful?yesno
»