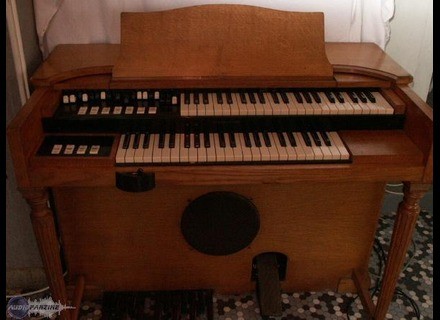 Hammond M3 année 1955
5
The Hammond M3 is a classic organ in the same vein as the Hammond B3. It's got pretty much the same make up, and a similar sound for sure. It has two sets of keyboards, each with about three and a half octaves worth of keys. It has a full set of draw bars, in pretty much the same fashion as most of the classic Hammond organs. It is a fully polyphony keyboard, and also has a foot pedals and a volume pedal.

If you're familiar with the standard lay out of organs, you'll definitely know how to use the Hammond M3. It doesn't really have any setting controls out of the ordinary that I can think of if you were to compare it to a Hammond C3 or B3. If you don't know much about organs, there's definitely a bit of a learning curve here. Having said this, accessing the basic features of the organ should be easy enough for all users. I don't know anything about the manual for the M3.

The sound of the Hammond M3 is everything you'd expect from a real Hammond organ. I've used it for recording with a Leslie 122 speaker cabinet, and the end result is definitely something special. I don't think that too many users will be able to tell the difference between the M3 and other Hammond organs, as it's very similar to the B3 as far as I can tell. I used a set of Gefell M 930 to record the Leslie, which picked up all the details very well. The M3 is definitely the real deal when it comes to organs...

I don't know how readily available the Hammond M3 is, or what kind of price it would command, but it's definitely a fine replacement for the B3 if you can't afford one. While I've never had the chance to have the M3 and a B3 side by side, I'm fairly confident that most people wouldn't be able to tell much of a difference. Don't be fooled with the fact that this isn't a B3, the Hammond M3 is a top notch organ.
Did you find this review helpful?yesno
»