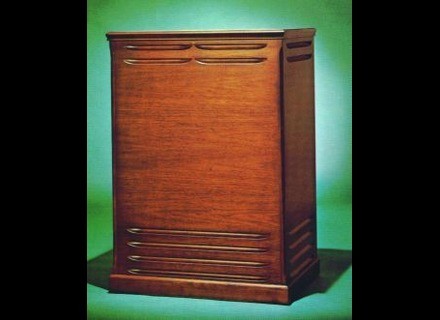 patrice_'s review (This content has been automatically translated from French)

Easy to use once connected (!). Generally connected to an organ or a universal housing adaptation (usually called pedal combo)
3 volume settings (bass / treble / master) and that's it.

Is one of the cabins with a sound well-typed (this is the same cabin as the 760, actually, except furniture). Some artists swear by the 760/770, which has a deeper sound, more subdued also, less rock, certainly.

This is a super cab. I use it live and I appreciateany the extra power compared to the 122.
it is also easier to connect.
It is less easy to carry a 760 (no handles, no wheels) but it is also much more class. And the body seems better built. I've seen a lot damaged 760 at checkout.
This cabin is a reference and the price is well below the cabins tube (122 or 147)

2066 & then's review (This content has been automatically translated from French)

Leslie 770
4
This is a Leslie, so a combo amp (usually for Hammond organ, but adaptable for other instruments, including guitar, piano and vocals), the tweeter and woofer, located on an axis vertical, respectively, to send their sound a horn and a double chamber rotary drilled. Which, thanks to the Doppler effect, gives an impressive record (visit http://www.captain-foldback.com/ for information on the operation).
The amplifier transistor.
His power is 90W indicated, but do not stop there, because there are a lot of losses, and the volume is more than enough for rock bands too rentr&#39;dedans, it quickly becomes inadequate when a drummer bourrine tad and a guitar amp in clean out his 50W.

This cabin is equipped with a 11-pin Leslie socket. It&#39;s taken a course designed for non-standard models of some late 70&#39;s Hammond organ, Hammond B3000 in principle I think. The copy I use belongs to my brother, and is connected to a portable Hammond X5.
We can consider the plug on other instruments, either through the jack "ext in" the organ, which passes to the Leslie without volume control (this setting must be done before the ext in ) or by purchasing or making a proper preamp (plans also available at http://www.captain-foldback.com/ above-mentioned).
Still, it must really want to engage in this process.
The speed control is done from the organ, or if the preamp has one. The cab can be in "off" (no rotation), "Choral" (slow moving) or "tremolo" (rapid rotation).
In this regard, the rotational speeds are adjustable by means of the positioning of transmission belts (especially for Horn Driver, the drum is easily accessible, a plate to be removed to access).
So the use is very easy, typical of any Leslie. However, the implementation is either extremely simple and fast if the branch on any of the materials for which it was designed, or demand the adaptation of a preamp or expensive (300-400 € I think, but is to be verified), less expensive but longer and demanding technical capacity ...

Leslie is one, and quite powerful compared to ordinary Leslie. The sound is true to the spirit of Leslie and without particular surprise. we note that the amp is solid state, it was not quite the grain of a 122, 145 or 147. Thus, we do not find the overdrive feature of these hot models, but this defect should not obscure the overall quality of sound.
Indeed, for the rest, the effect is extraordinary HP rotary, it is used on an organ, guitar or other instruments. The reason for his fans to invest not only in the cabin itself, but also in the preamp that would allow connection to other instruments. I will not sound achieved on an organ, it is a sound of Leslie, and I am not sufficiently expert to get into a comparison of all cabins. So I will comment mainly the effect applied to a guitar.
In choir, we have a very flat sound with an effect reminiscent of a flanger or a phaser, but much more subtle. This is the effect found among others in the beginning of "Electric Ladyland". It is more likely to use it to use melody. Tremolo in there, the sound becomes whirling, perfect for the game agree or arpeggio.
We never tire of playing the guitar parts of Dark Side Of The Moon (Pink Floyd), the song of Planet Caravan (Black Sabbath), provided the bedding in the Leslie sound, if possible using two microphones placed along the desired effect (it asks the place, but we can get a fairly wide range of sounds). I will not list all the titles on which we can get a hit, but you get really believes, regardless of the instrument connected to it.
It should also not consider the Leslie as an amplifier to faithfully reproduce the input signal, even in "off". It is a fact, and the sound is distorted almost inevitably (unless perhaps apply a precise equalization input mode and use the "off", I have not tested and I will test surely not).
A very interesting aspects of the use of Leslie is the transition mode "choir" and "tremolo". Listen to "Dark Side of The Moon" to get an idea.
Last thing: it&#39;s still a very powerful modulation effect. On an organ in choir he will give expression to the game of the organist. On other instruments, however, this effect is used sparingly and wisely, because you would quickly overload the sound, especially in tremolo mode.

I use this cab for about two years and the first that I use. For the stage, I mainly use a software modeling of the Hammond organ: Native Instruments B4. It works great, is very faithful to the original, but leave the sound of a Leslie on two tracks, in stereo, does not render the richness of the sound of rotating speakers. Modeling gives a (very) good idea, but something is missing. The real, in terms of sound reproduction, remains well above its computer representation.
The Leslie was acquired with the Hammond X5 taken for a set of hand € 1200 (prices approximate the market), which gives between twenty-five and thirty years old now. His condition began to deteriorate seriously (problems of contacts and older engines) and a review would be welcome.
Ultimately, this is a good material for those who want a powerful, affordable Leslie. As for the choice again, I would ask the following questions first: If in any case the power is not sufficient, would not it be more interesting to buy a decidedly less powerful, but better (I think of the series 122, 145, etc..) intended to be transplanted in a good sound system? Especially since the principle of buying a Leslie guess not the desire to effect a Leslie estimate, but the requirement of a real Leslie. Otherwise computer modeling done nicely and is really very convincing (unless you are allergic to anything that is not purely analog.). In addition we must not lose sight that Leslie, by its weight, its size, its price and finish, much closer to the cabinet as a Norman classic combo accompanied by any modeling . So you look twice before moving it and hit it against all corners of walls ...
Remains a very good material on which I always enjoy playing.