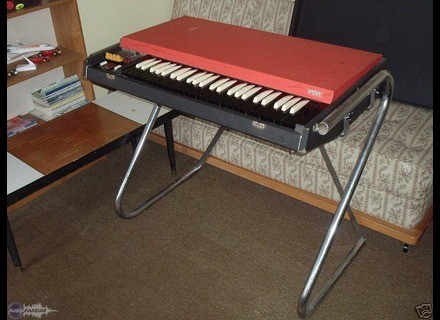 fleshtonejm's review (This content has been automatically translated from French)

Vox Continental TC
5
Portable organ (Combo organ), the TC is an English model including recognizable by its solid wood buttons.
Few adjustments to make and that's good: 4 dashes (draw bars) and that's it!
From the aesthetic point of view, the top red is the best effect in Z and feet are characteristic. It is the mark right away on a stage!

Nothing complicated about this model of a usage point of view.
Technically, it's packed with transistors, dividers, capacitors, etc., and then I'm not an expert, which can be a problem in case of failure, because the repair shops have often forgotten what it was like and do want to take the trouble to spend several hours searching the failure (it happened to me!). Fortunately, there are still people who worked on such instruments and are ready for you to fix it for 3 francs 6 in (well, 50 cents, whatever ...)! That said, a Vox organ rarely falls down if it be treated with the respect due to his age ...

Be careful, it's heavy, the beast must weigh within 30 pounds and the handle, even if it is strong, is being challenged in the road. I recommend you buy a devil, which greatly facilitates the transport ...
Especially since the feet are in a suitcase in hand, which also contains the volume pedal ...
The feet are fairly hassle to mount, the best thing we passed on me is to put the organ on a stand X feet to hang down and then all ... It works very well!

What amp to use with this organ? Ahhh, the eternal question!
A priori, a Vox, but given the price ....
Personally, I found a small Fender Champion 110, covered in red Tolex, which fits perfectly with the top of the organ! This amp sounds 25W super clear and deposit seriously! Sufficient for the concerts in bars, is to say!

The sound is typical of the brand, a Farfisa less acute, less severe than Acetone. Its typical 60's especially with the vibrato (by the way what is the point not to vibrato?).

I have my organ since the early 90s and I have only criticized him: he's too heavy!
But frankly, what better (come on, I tied up with the Farfisa Compact) to play in a garage band?
I play on stage several times a year and so far RAS!

In recent years, their side is gone and I think it's a shame because some are very often overestimated.

Still, it's a vintage intrument, typical 60's, solid and reliable, which will not disappoint its user.