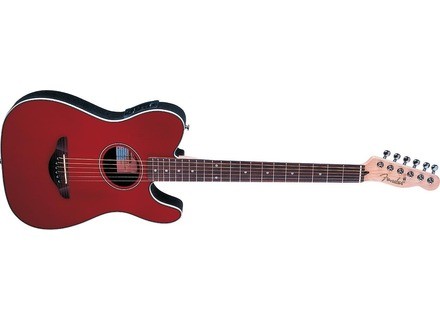 Telecoustic [2000-2005], Other acoustic-electric guitar from Fender in the Telecoustic series.

Fender Telecoustic [2000-2005]
3
This is an accoustic/electric guitar made by squier. It has composite (fiberglass) back and sides with a wood top and bracing. Maple neck and Fender preamp with eq.

I bought this guitar from my brother for $80.00 US. He needed some cash and I needed an acoustic guitar as my Ibanez was ready for retirement. This was not a choice I would have made on my own but because of the price I decided to give it a shot.

This guitar is very light weight making it a good travel guitar. It plays pretty good and has a decent but somewhat bright accoustic sound when not played through and amp. When you put this guitar through and accoustic amp It really comes to life. The Fender pickup and electronics work really well. Because this guitar has a real Telecaster neck it makes it a great practice instrument for whatever style of music you play, but Is also supprisingly gig worthy when amplified.

Im not real fond of the bright almost tinny unplugged sound this instrument has. String choice can help this alot! I use medium electric strings intead of light accoustic strings on this one.

The construction quality is pretty good actually. My brother owned this guitar for about 2 years before I got it almost 2 years ago, so its going on 4 years old. The tuners still hold good, It has shown minimal fret wear (and believe me it has been played alot), The electronics are all still good, and the finish on the wood is holding up nicely. The only thing I have had to do was replace the bridge pins because one of them broke (plastic).

A very good travel or practice instrument. Can be alot more amplified. Im happy with it and dont see selling it in the future. It is my go to practice guitar.

I like the paisley finish.
The guitar has a bright sound.
The fishman pick up is impressive.
It also has an onboard EQ.

The action is bit high. But I can adjust it.

Typical of Fender guitars, the construction is more than adequate.

This is a great back up acoustic guitar.

It's not as full sounding as a deep body acoustic.

The sound and playability however, are fantastic.

I was going to give it 4 stars for quality.

But with the marked down price , I'll add another star for value.

Fender Telecoustic [2000-2005]
4
I wanted an electro-acoustic so I could plug it straight into my BOSS-864 8 track recorder (no need for an external microphone) and so I bought a secondhand Tanglewood bowl back but this kept moving down my lap when played unless I used a strap. Also the Tanglewood had no cutaway meaning I had no accesss to anyhting above the 15th fret - I saw the Fender reviewed in a magazine and it came out very highly recommended. I took the secondhand Tanglewood back and they gave me exactly what I had paid them in part-ex. The Telecoustic was marked up at £199 - this was in Sound Control, Bristol UK.

The most useful aspect of the Telecoustic is that it allows easy upper fret access meaning I can play up in the second octave (fret 12 and above), with ease. Also the depth of the fibreglass sound bowl is very shallow so it is comfortable to play. As a devouted Telecaster user, the footprint is practically identical to its electric counterpart and this is very appealing. There was also a proper fitted Fender carry bag that came with it - nice touch.

The sound hole looks like it has been put out by some inexperienced child with a jigsaw, very rough and ready. However my biggest bugbear is that having got it home, there was a manufacturing flaw and one of the fret was lower than the rest meaning it choked when playing certain notes. It had to go back and luckily they could fix this at the shop, but it was an unexpected turn of events especiaally from a company with Fender's reputation. The built-in preamp is also a bit makeshift as part of it was coming away and had to be stuck down again. Apart from the that the overall feel is very good and it seems built to last.

It definitely sounds like a more expensive guitar to play, having plenty of bottom end when you dig in with a pick (I don't finger play at all), the top end sounding sweet. It needs a battery for the preamp (my Tanglewood was a passive system that didn't need one), making the Telecoustic unusable through my electric amp as it howls like a banshee with feedback noise. Like most acoustic based guitars it is very unforgiving, the strings being a gauge heavier than my electric guitars. Having said all this, I am very happy with the overall package, it doing exactly what I want it to do. More attention to detail would have been nice, the neck is a bit cheap 'feeling', I would have personally have prefered a satin finish on the neck that would have made it even more familiar territory having made the crossover from electrics. I would be interested to hear from anyone who buys one to compare notes.

Fender Telecoustic [2000-2005]
4
I got the guitar from Musician's Friend for $263 inclusing the tax and shipping. Needed a good Acoustic/Electric to play in concerts. I ordered it online.

It has a nice acoustic sound and sounds even better plugged in. It has a nice electric style body making it easy to play and hit those high notes.

The guitar itself doesn't get a very loud acoustic volume. It doesn't stand by itself so hard to play by youself or around the houe not much ring to it.

It is very well made. You can feel its durability when you hold it. The pickup in the middle is not as stable has not broken but it is very nice.

Great guitar for a band. Can get very loud but for the solo artist look for something not as thin-line.

This review was originally published on http://www.musicgearreview.com
Did you find this review helpful?yesno
»
Read the 14 user reviews on the Fender Telecoustic [2000-2005] »

Other Fender other acoustic-electric guitars