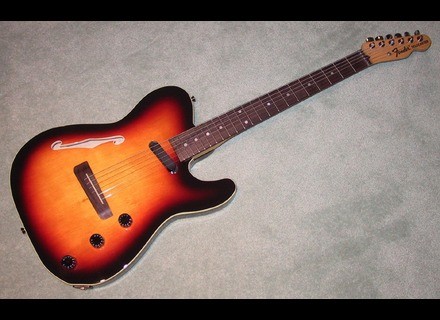 TLAC-950, Other acoustic-electric guitar from Fender.

amangenot's review (This content has been automatically translated from French)

Fender TLAC-950
5
It is a rare and little-known guitar, then give all the details:
This is a series designed and manufactured in Japan in the 90s, it seems to coincide with the celebration of 40 years of the Telecaster, so 1991. There are different names: first "HMT" to "Heavy Metal Telecaster", which seems surprising for a hollow-body electro. In reality it is a derivative of a series, also hollow, but more heavy because typed equipped with humbuckers and a tremolo. This series "HMT" had a round head with a painted Stratocaster, with the single name "HMT" and not "Telecaster". Later became head type Telecaster '70s, with the big logo "TELECASTER" classic of this era. So much for history. I do not know how many copies it was made, in any case it is difficult to find one.

There is therefore a type Thinline Telecaster, a hollow mahogany body with spruce reported in a table (as the catalog Fender 1997). The bridge type is of rosewood acoustic guitar. The strings are attached in a conventional manner for a Tele, through the body.
The handle has a particular pitch for a Telecaster ie 25 "1 / 8, with 22 frets and a satin varnish. Rosewood with a radius of 12" and fixed by 4 screws arranged in a trapezoid (as in series Deluxe U.S.) to relieve the heel. The handle has a tilt adjustment compared to the body, back to American Standard.
Electronic side, it has a piezo pickup under the saddle, a magnetic pickup at the neck, slightly slanted, a preamp with volume control, tone control and a pan to distribute the sound from each microphone. Note: it seems that at one time the neck pickup was a Lace sensor, which was later replaced by a conventional magnetic pickup.

The handle is very nice, you'd play on an electric, even pulling up with a light acoustic (12/54), which is big for an electric. The agreements are very easy to place, including bars. Only the reduced width of the saddle makes it a little less easy placement agreements at the top of the handle, you may touch the rope to the side (but as a power, no more no less). The access is facilitated by the sharp tail light, said it is in my opinion unnecessary for this type of guitar.
The concept Thinline makes it very light and handy, nothing wrong on this point.
His side, of course not much to learn in pure sound. Once connected, you can easily get a sound very convincing on an electric guitar amp. This is handy if you want to use a guitar Electroacoustic occasionally in a group with the gear usually dedicated to electric.

The balance control allows for the piezo alone, the neck pickup alone or any intermediate mix. On a console, the 50/50 setting gives the best result, strangely it gives a brighter sound than piezo only, slightly scooped mids, which provides a fairly realistic acoustic sound.
Only weak point: a dedicated equalizer in piezo would use it better.

I use for 3 weeks, I purchased to replace my Takamine EAN 10C in its use for electro concerts or even in repeats. The reduced size will make any event much less tiring and it should be up. I had already bought a few years ago Telecoustic this purpose, but clearly this guitar wants no more than its price Made in China (so really not much). This time I should be much happier with my choice!
Another advantage is that guitar intrigued spectators, for the reasons mentioned in the beginning.
A special guitar

Other Fender other acoustic-electric guitars