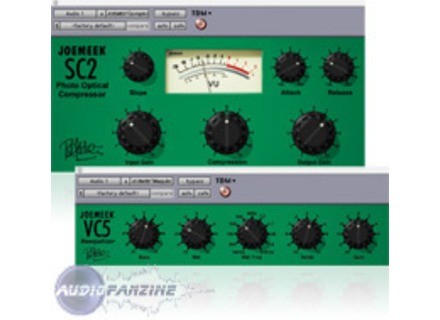 Joemeek Bundle, Other effects bundle or multi-effect from Bomb Factory.

Bomb Factory Joemeek Bundle
4
The Bomb Factory JoeMeek Bundle consists of two plug-ins - the SC2 compressor and VC5 equalizer, or the 'Meekqualizer' as they call it. I believe that both of these plug-ins are available as individual plug-ins as well as in other larger plug-in packs as well. We have this bundle at the studio where I currently work, so I wasn't involved with the process of installing them. As far as learning the plug-ins is concerned, it should be pretty straight forward if you are aware of the parameters and controls often associated with compressors and equalizers. So as far as these types of signal processors go, these are quite simple. The compressor does have a good amount of control however, and the EQ is a three band EQ with set frequencies for the bass and treble and mid frequency selection available. The manual shouldn't be necessary for this bundle, but I haven't seen it so I can't speak to it's make up.

We run the Bomb Factory JoeMeek Bundle of plug-ins on an Apple computer with a Pro Tools HD system, so the plug-ins don't tax the computer directly. In any HD system you'll certainly be okay, and I wouldn't think that too many people would have problems running this on an LE system either since they don't appear to take up too much processing power. As long as you have a system that you're currently comfortable running plug-ins on, you shouldn't encounter performance issues unless you're really running a lot of them.

If you can get the Bomb Factory JoeMeek Bundle at a decent price it's definitely a nice addition to your plug-in suite. Both the VC5 (EQ) and the SC2 (opto compressor) are clean sounding and are very easy to use. I would say that I like the compressor more than the EQ, and it definitely sees more use when I'm mixing as well. The EQ is fine for simple equalization, but it's somewhat limited in it's ability since it's only three bands and the top and bottom bands don't have their own frequency selectors. These aren't my favorite plug-ins to use, but I love having as many options around as possible, so I do like to use them for extra colors when needed. If you can scoop these plug-ins up for a reasonable price, they're definitely cool to have...
Did you find this review helpful?yesno
»

Other Bomb Factory other effects bundles or multi-effects