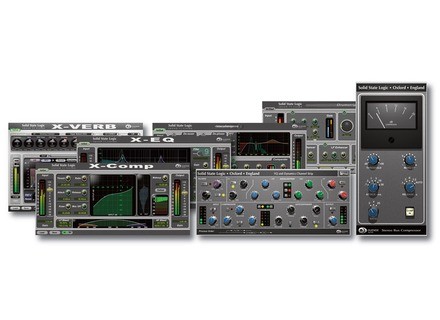 Duende Native Studio Pack, Other effects bundle or multi-effect from SSL in the Duende series.

Hug42's review (This content has been automatically translated from French)" Fantastic - Woaw!"

SSL Duende Native Studio Pack
5
The installation is done it without problems?

I install the app natively Duende (free on site) and not the module Java on Firefox license application was not done. But once communication with Java installed Solid State Logic could be done without problem. So when you installed the software for the first Duende licensed virtual (virtual tab) installs and allows you to activate your account since the SSL plugins you want to test. But you also have the choice to buy a USB tab for licenses instead of the virtual.

Apart from the problem of missing module installation is super easy just follow the instructions.

What is the configuration of your computer?

Yes, now I have only tested the channel EQ & Dynamics and Buss compressor.

This software + hardware is stable?

For how long have you been using it?

A little over a week (notice posted here might still be changed). But from the first tests woaw the big slap what: I'm sorry but could ... what a sound!

The Buss Compressor is formidable on the Master. Punch the punch!

Yes, I work with Native Sonnox Oxford and plugins from Waves also Native. I have just acquired the channel EQ Native Duende and I must say that I would use virtually the EQ from Waves (Q10 and Renaissance EQ) except for non-priority instruments in the mix as mono or Stereo duende native plugins are not gourmands. The EQ that can compete in is the Sonnox EQ. Clearly Sonnox is also formidable, but with its grain just as in the Waves bundle CLA compressers, Puigtec (Pultec), L1-L2 limit, MaxxBass are some plugins needed but with their own grain.

It is undeniable that its quality sound processing and ease of use are the major advantages of Duende. How accurate, how clearly; course I can not compare with UAD and SSL consoles hardware because I do not have hands but we perceive all at once that the mix becomes more clear and precise, what he breathes and without distorting the sound origins worked because the frequencies do not alter the rest of the spectrum.

Knowing what you know now, would you make the same choice?

And how, in addition no key i-lok (as Oxford and Waves, for if the i-lok key is not loose in the sea ..).

I do not consider myself a pro but what a pleasure to work with the manufacture of high quality.

Published on 12/19/11
Solid State Logic has announced that the new RTAS versions of the SSL Duende Native plug-in collection are available now from the SSL web site.