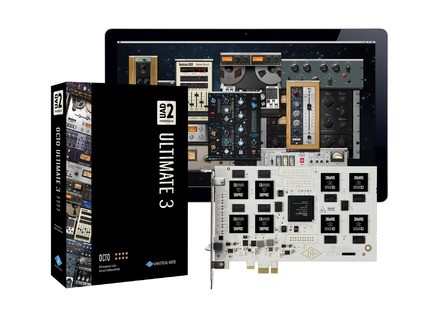 UAD-2 Octo Ultimate 3, Other effects bundle or multi-effect from Universal Audio in the UAD Plug-In series.

Universal Audio will launch in September the Thunderbolt versions of its UAD-2 Satellite DSP accelerator modules.

The UAD-2 Satellite Thunderbolt DSP accelerators are available in two versions: Quad with four SHARC processors and Octo with 8 processors and for each version, Universal Audio lets you choose your plug-in bundle: the Core editions ship with the Analog Classics Plus bundle and the Custom edition adds three plug-ins that you can choose when registering. Last, the Satellite Thunderbolt Octo can also be purchased in Ultimate Edition with the UAD-2 Octo Ultimate 3 Pack that includes 79 plug-ins developed by Universal Audio (but no third-party developers) and the UAD Software v7.8. This pack is also available with the UAD-2 Octo PCIe card for the same price as the Satellite Thunderbolt Octo Ultimate.