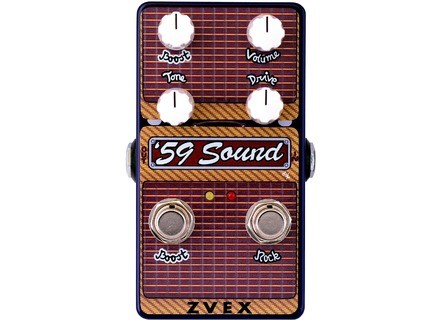 One of the most sought-after amps (combo in fact) is the 1959 Fender Bassman. Originally developed for the bass guitar, six-stringers began realizing how great it was for them – characteristics like responsiveness and that fat tube driven sound when cranked up. It sounded good enough that Jim Marshall used the ’59 Bassman as a template to develop the first Marshall amps. Below is a video demo using a 1979 American Strat and later a Strandberg Boden Prog 7 (to see how those Fishman Modern Fluence pickups respond).

I’ll cover each aspect of the ’59 Sound. First, the TONE is a treble booster of sorts that offers a very wide palette that is not overly dark when turned down. I find a lot of ‘tone’ knobs on pedals tend to be far too dark and muddy from the very start (too much low end), whereas this is not the case with the ’59 Sound (likely because the Bassman was designed for bass players and they don’t exactly need a lot of extra low end). As you turn up the Tone to full, it seems overly bright on the bridge pickup, but not brittle… yet it works quite nicely on a neck pickup, making it sound very lively and rich in harmonics.

The DRIVE knob really brings to life that Bassman sound. Turned up only quarter way and a clean signal sounds very warm and thicker, but far from aggressive. Around the 11 o’clock position you get that true tube amp sound and a slight breakup. Around 1 o’clock it starts to get a bit mean-spirited and you can hear that bubbly tube saturation kicking in nicely. Once you go full tilt and hit some bar chords you can’t help but smile – the sound is very reminiscent of Hendrix pushing his amp to the limits… a thick three-dimensional, classic rock sound. Concurrently, leads sound smooth and edgy without any unwanted artifacts in the tone.

The BOOST in this pedal is the infamous ZVEX Super Hardon circuit. It can take your volume from parity to 50-times! I’m uncertain what conditions would even have a person want to boost a signal with the knob even half-way, but it’s certainly there if you need it. What I like about this Boost is that it makes your tone sound just a bit more ‘mean’ or ‘angry’ without adding color – a very nice transparent kick in the pants. The Boost can be used on its own or with the Drive (it follows the drive, and so if you want to push more distortion into your amp, then this will do it!).

Of course, there’s a volume knob, which needs only a touch of tweaking to accommodate how much Drive and Boost you plan on giving your signal.

Encased in steel, this version of the ’59 Sound is a re-issue… in a vertical format with new graphics. The original ’59 Sound had different graphics in a horizontal configuration. Most pedalboard users prefer pedals that take up space vertically rather than horizontally, and so ZVEX listened. The stomp switches have a nice solid click to them, and both are far removed from the plastic knobs. The standard 9v (3mA) power input is located at the back, and away from wandering feet (it also comes shipped with a carbon-zinc battery).

This pedal is not meant for high-gain playing, but if you are looking for a distortion that can work with anything from Blues, to Country to Classic Rock (particularly from the 1960s and early 1970s), this would be a great addition to your pedalboard. Having said that, the ’59 Sound also works very well with other distortions and even fuzz – think of the ’59 Sound as an amp of sorts and that you are adding other pedals to your ‘amp’ and you get the picture.

What helps the ’59 Sound stand out is how responsive it is… to palm muting, lighter picking, rolling back the volume, etc. ZVEX did an excellent job recreating that characteristic so well-known in the Fender Bassman and now it’s accessible to everyone. The other important feature is the incredible headroom it has. Obviously the Boost makes this possible, but even on its own the Drive produces significant volume changes when turning from low to higher levels. Just like a real amp!
Did you find this review helpful?yesno
»

Other Zvex other guitar saturation effects