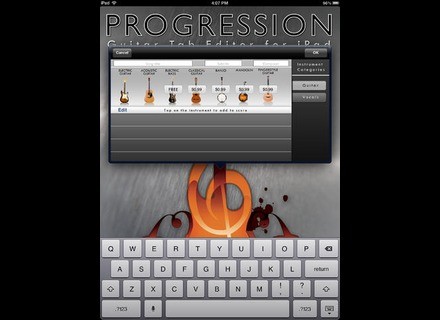 Progression for Ipad, Other software for iPhone / iPod Touch / iPad from PreSonus.

PreSonus Progression for Ipad
This one is just too cool. After years on various notation and or tab programs from good stuff like Notion or Finale to horrid stuff like Guitar Pro being able to do it on the iPad is awesome.
Progression lets you import Notion files obviously but also imports guitar pro files.
You can import files via download, e-mail or by syncing in iTunes.

There is also a free version. The paid app lets you buy different sound in addition to the limited but good sounding set it comes with.
The interface is very guitar specific. You actually enter the tab by clicking on the fret position on the virtual fret board. For chords you toggle a virtual chord switch where the notation will sit on the same spot until you toggle the switch again.

The down side is that it displays in a combination tab/sheet style. But i can live with this.
You have a build in mixer with same basic effete like distortion and reverb.
In terms of input you get 64th notes to whole notes. Including dotted, double dotted, tied and tippets. Actually you have the option to feine you subdivision so you actually get 5 over 5 notes without work arounds.
The bends you can enter run from bend, pre-bend, release, bend and release to pre-bend and release. You can also enter text. For special notes. You get grace notes before the beat, on the beat. muted notes, etc...
You can save the files you're working on as notion files or as pdf and e-mail them.

Clearly just like with their PC/OSX programs those guys went deep to give you the tools you need. If you don't want to spearing for the 5 bucks for it I strongly suggest to at least check out the free version. Because it's likely that will not only have you get the paid one but also have you look into their "real" programs.
Did you find this review helpful?yesno
»

Published on 08/26/14
Progression, now available under the PreSonus brand, has received a new update.

See all 9 photos of PreSonus Progression for Ipad »