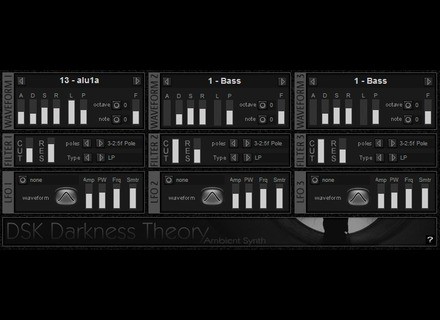 DSK Music Darkness Theory [Freeware]
4
DSK Darkness Theory comes with over 30 presets, and some of them are really good and some not so good. But you will have the options on hand to transform those presets into your own with just a few small tweaks here and there. Darkness Theory has 3 LFO whit output routing and also full midi automation. It can be downloaded for free, but there is no manual available for it so you will just have to mess around with it until you understand what everything does which isn’t hard because its not that big of a VST. Everything is pretty simple and editing your sounds are self explanatory.

The DSK Darkness Theory runs great and has never gave me any issues on my Quad Core PC with FX4100 Processor. I have had this Vst since 2009 but have only used it a handful of times because I like to work from presets and there are not a lot of them in Darkness Theory, you are kind of on your own with this VST. But it leaves you with plenty of room to create.

You can download this for free, so there are no risk, if you don’t like it just simply remove it from your computer. It will work great with all of your main music production software programs. The sound quality is solid, but not something I would pay for. But I imagine that if they were selling it, they would have put more effort into the VST to make it better and more in depth. I am happy that I did download it and will keep it installed on my system for years to come. I have never heard of Darkness before, though I have tried several of DSK’s products in the past. All of the VST’s they make are free and they are all pretty good and easy to use.