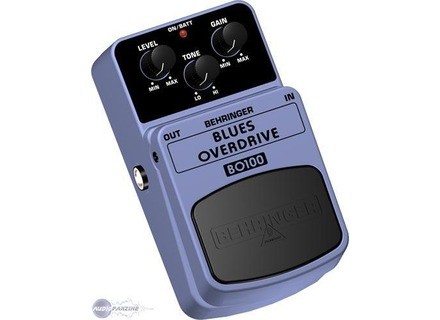 Behringer Blues Overdrive BO100
4
Behringer has recently released a line of pedals that are Boss copies. This one is a copy of the famous Boss Blues Driver (BD-2). It features a level, gain and tone knob.

The sound is very reminiscent of the Boss Blues Driver. For those that don't know, the Blues Driver is like a lower gain tube screamer. It works awesome with lower gain amps when you wanna push it into that sweet overdrive sound without having it go crazy and hectic like most tubes creamers can get. There is less of a mid-hump than the tube screamer, and I think this one works better for the rhythms where as tube screamers tend to work nicely for solo boosting. Pretty much, if you've experienced a Boss Blues Driver, you've experienced this pedal.

If you're cheap, just buy the Boss product. While this pedal isn't bad, it's mainly just a copy of what's already out there. You can find the Blues Driver cheap enough on eBay to where it doesn't make much of a difference when it comes to choosing between this or the Boss counterpart. I'm also not a huge fan of supporting clones. That said, there's nothing inherently wrong with the pedal. It seems sturdy enough to withstand touring, and it sounds good enough to where it could fit in most rigs without a problem.

Draix's review (This content has been automatically translated from French)

Behringer Blues Overdrive BO100
5
As the name implies, the BO100 attempts to reproduce the sound bluesy vintage.
Rglages basic (gain / master / tone). Powered by 9V battery (a little maneuver dlicate the very first time) or transformer.
Next to the price (less than 20 euros!), The plastic shell and feeble appearance of pots (see the last) n'tonneront person.

The BO100 is a excellentepdale: according to the hardware you have used every opportunity to grasp the nuances as it respects (apart from a small augmenatation AIGS) the signal line. His three pots more than enough for a wide range of sounds trs.

I say BRAVO! How to imagine that one day we can have such a product for such a price?? "You had rv Behringer has done."
I played on a H & K tube 20 with an Electro-Harmonix rverb loop.
What else: my bluesy, buy it without hsiter!

I have for a month.
If have other Behringer products of this style, I take.
UNBEATABLE quality report for the BO100.

manson.reznor's review (This content has been automatically translated from French)

Easy to use (if you are really stupid)
A manual?! Why a manual?!

Used with a customized EMG DG20 + Start, Telecaster, and a copy of a copy of SG.
Not a pet breath to report!

Excellent for a range of Blues sounds like SRV, Buddy Guy, etc ...
You can have a very clean sound and warm. We can therefore use in this case only with the low gain boost.
Or otherwise have the clean / crunch by pushing a little gain. Moreover, it responds very well to the attack! Moving from a clean sound to a creamy crunch just by pressing more notes.
Can also be used to overdrive the Rolling Stones rock genre or sound a bit like Pete Townshend (current period).

Regarding the use distortion at the beginning I was skeptical, but it goes pretty well and even beyond. The sound becomes more "fat" but loses definition, however, if the drive is at the bottom. We will not be able to do with metal, but a good old Hard Rock, OK!

Note: it has a small tendency to boost the treble, but this is corrected with the tone. I would say it's an advantage with humbuckers. It is a misfortune with my SG ..

I could compare it a few weeks ago with the Boss Blues Driver.
Now there's no doubt, the BO100 well a copy of the Blues Driver. By flipping a pedal to another, the sound is almost identical ...

What I like? All.
The warm and creamy. Respect for the sound of the guitar (very low coloration).
The possibility of using only boost.
And especially if it's Bluesy I love so much!
This pedal is super versatile, allowing to cover a wide range of sound.

I'm really in love, and more in terms of price, why not use it!

on the other hand, any hair metal, go your way! This pedal is not for you. So instead of putting rotten advice because it is not enough "distortion" to taste, buy the ultra Metal or other ...