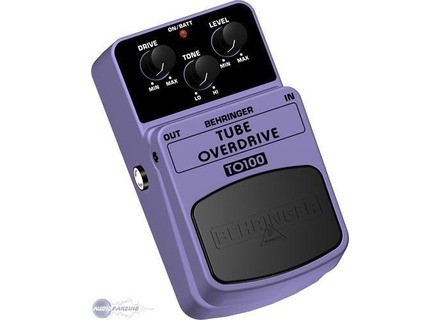 Behringer Tube Overdrive TO100
4
I play music as a hobby (a very SERIOUSx1000 hobby) im a guitarist, bassists, keyboardist, and upcoming drummer :D

im looking for a band, i like all styles of music, guitar is my main instrument.

i have been playing for about 2 years

I bought this unit at Long and McQuade Surrey, (British Columbia, Canada), and i paid 34.99 for it.

I really like the overall sound of this pedal, the overdrive isnt extremely heavy, like most distortion pedals, its clear and crisp (and not muddy either)

I don't like where the battery compartment is located (not much of a problem for me, but if ur not using an adapter then it gets a LITTLE bit annoying sometimes)

and the fact that its made of plastics kinda scares me... but i dont like smash my foot on the thing so it doesnt really matter. The padding at the bottom absorbs the shock so its sorta hard to break

even though its plastic, its construction is ROCK SOLID.

if ur a player that tends to jump and smash his stompboxes, then this isnt probably the pedal for you

eric511's review (This content has been automatically translated from French)

WITH A V-AMP PRO / NOTHING TO DISCARD

1 WEEK OF USE / SOUND IS LIKE OTHER TRADEMARKS IN 4 TIMES CHEAPER
Did you find this review helpful?yesno
»

Behringer Tube Overdrive TO100
So one manageable effect with 3 knob, ultra simple, level, gain and tone.

No editing but personally I f ...

the manual ... rather ideas settings have been nice (as in boss what ...)
But hey it is poised for such pedal.

overdrive light of the "powerful" pure and classic tube and realistic.
9/10

Purchased in March, I was looking for an overdrive pedal to pair it with a boost (actually a Screamer) for a widely versatile tube sound, from classic rock to heavy rock limit ... (I do not think metal, or an active micro-type EMG) I like too !!

At the base of my pedalboard, I had a top-end distortion pedal, an AMT B1, very versatile, but actually operated at 20% ... (because need to bend down every time to adjust according to the song) blow to the resale price in secondhand I took my TO100 TO800 and the good shielded cable and the report became perfect.
I have a sound tube that responds well to my microphones (L500 and Humb lipstick) and a rhythmic sound of thunder !! 10.09
I'm in seventh heaven !!!
Yes with experience because being creative leisure, Berhinger it rocks for a bargain ANY competition !! Like 9/10

PS: good fix pedals and press frankly without jumping in with both feet above, I have NEVER had a problem with Berhinger

Hifi's review (This content has been automatically translated from French)

Behringer Tube Overdrive TO100
5
Analog overdrive effect a priori. 3 knobs. I put 8 only because the buttons look far too easily, the slightest touch and the setting is changed. The hull is made of plastic, but hey if a steel hull resistance when the pedal goes down and everything is broken inside ... can be amortized over the plastic .. In addition ca weighs less!

The manual does not have a page but need more. Just turn the knobs.
The only downside: access to the battery a bit difficult ... And unfortunately the position of the diet as a problem: it is on the side. Impossible to stick the pedals against each other.

C by the good against what I love. I have a DS1 and MT2 from home boss. Even if these pedals are distos much heavier, the sound quality of the Behringer is largely the distance. When you play with this pedal was fun and a sense of quality, cleanliness. It is a true overdrive so no screaming metal

a small but very nice crunch and not easy to obtain without this pedal just to the saturation of the amplifier when you can not push more than 1.5 .. .

It's been a week since I use this pedal. What I like most c sound, the sensation of sharpness and response to the game All this must be found in other brands and other models, but not at this price !!!!!! In short if you are looking for an overdrive that makes overdrive and not necessarily such a model of such a mark because "it is too top that mark," and if you have 23 euros: go for it.
Did you find this review helpful?yesno
»
Read the 14 user reviews on the Behringer Tube Overdrive TO100 »

See all 16 photos of Behringer Tube Overdrive TO100 »

View all 2 videos of Behringer Tube Overdrive TO100 »

Behringer Tube Overdrive TO100 manuals and other files