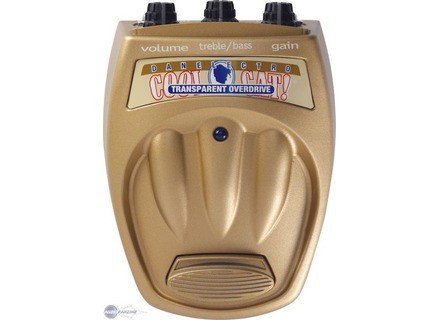 Danelectro CTO-1 Transparent Overdrive
5
The Danelectro Transparent Overdrive (TOD) is a gain pedal with just enough of the good stuff to fill a particular niche. Unlike the “Food” series of pedals from Danelectro this pedal has a metal housing, metal input and output jacks and is true bypass. These are great upgrades without putting the price through the roof. The TOD runs off of 9 volt battery power or a power adapter. Also these pedals have a new look and the design is much more professional looking. Mono input and mono output, a knob to adjust the gain, volume and a two level knob that works as a two band EQ. Simple overdrive layout, but the two band EQ is a nice touch.

This pedal goes great in front of a clean amp, or an already overdriven amp as a boost. The two band EQ allows you to tailor the sound to your liking, though the stacked tone knob may be harder to adjust than a two knob version would have been. The jacks are located on the top of the pedal as opposed to the sides like most pedals, which makes it a tight squeeze getting the power plug in when using a One Spot with right angle plugs. Having all this at the top of the pedal is no big deal to me because I find it’s more of a set it and forget it pedal.

The first version of this pedal is no longer available due to the fact that it was a close clone of another more expensive overdrive. This shows in the sound department because it sounds very, very good. It works great as a solo boost, but I love it for that slightly overdriven tube amp on the verge of breaking up type of sound. You can get some rocking tones out of it with the gain maxed, but it sounds so good at low gain levels. This pedal lives up to its name because it is very transparent. It’s like taking the tone of your guitar and instead of covering it with distortion; it’s like just turning up the gain on a nice tube amp. It’s what I’ve always looked for in an overdrive, what you put in is what you get out only with more gain.

This pedal just rocks in everything that it’s meant to do. No it doesn’t do metal or fuzz, but its warm overdrive, slight tube sounding breakup, or a versatile boost is just plain great. Would I buy this again? In a heartbeat. These pedals are great at three times the price, but getting one at this price point is just awesome. I haven’t had any issues with the pedal whatsoever and the tones are great and all within a gigging musician’s budget. Great job Dano!

Danelectro CTO-1 Transparent Overdrive
4
The Transparent Overdrive is a great boost and overdrive. I don't know the technology behind it but it works great. It's very straightforward to use. It has a great look, some people might not like it, but I like how it's different from the usual square box.

The pedal is straightforward, all the dials work well. The treble/bass control can be hard to deal with as you easily can turn both at the same time so it takes some practice. The gain control starts to add gain from about 9:00 and goes from a little edge to enough crunch for some classic rock. The volume control can give this pedal a serious punch, it has a lot of output so it works great as a boost. The on/off switch feels different than most pedals but underneath it is a standard switch that should last a long time.

I got this pedal as a beta as I was doing tests for Danelectro. It was a homerun for sure and I love the tone. I have yet to find a situation where it does not work stellar. I use it as a booster most of the time and you can use it to clear-up a darker sounding amp or to tighten up an amp with a loose low end. It delivers in every situation. As the name says, you can really dial this in to be extremely transparent to your base tone. The tone controls work really well. With them set at 12:00 you get a bit of TS-style mid-boost but with the use of low and high, you can even out the sound of the pedal. When I use it as a boost, I run the treble a bit higher so it cuts through the mix nicely. Works like a charm.

Killer pedal, I use it a lot. I know that it was discovered to be a copy of a well-known pedal which is a big no-no and Danelectro changed the Transparent Overdrive. Still, this won't stop me from enjoying it.

Danelectro CTO-1 Transparent Overdrive
5
Clean boost pedal in and overdrive. Transparent overdrive amends little sound of the guitar. Often compar in Cochrane Timmy but obviously not to the same price.

Setup is simple, a volume knob, a gain easy rgler. As against a single knob bass / treble not always easy to use. In fact you have to turn the base of the button to bass, and after turning up the treble button. An entrance, an exit, a normal start button what. Bypass works, has used too. English manual but easy to understand, the packaging is retro wish is cool, in addition I got some vintage stickers made rather fun. More that engage the 9v battery included and go!

L we enter the heart of the matter and wow! It pete! In clean to say that a boost we can say that a boost! With a little more gain you get some nice overdrive, but eventually enough lgers, I would say even mild and it is very pleasant to play classic rock or country / blues. After it takes a little tweak to find the right rglage based on qualisation, micro used etc. But after having well rgl the pedal, guitar and amp, it does not touch because it's beautiful. For 39 euros I rest on the buttocks. It's soft but certainly when you love beautiful!

I did that for now, but no regrets. For 40 euros it's hard to do better. I have hesitated with overdrive Boss od-1 or Behringer TO800 but it's the best quality-price ratio. The pedal is so solid metal, but especially the sound that gets is gnial. The one thing ngatif the knob treble / bass lousy. But otherwise I am very satisfied, I think I'll keep it long this little pedal.

Edit June 24, 2010: I still have this pedal and I love it. I use it mostly as a boost and I can not play anymore because it beautifully embellished sound without dnaturer. I let it clicks into overdrive the amp too. Level the middle and gain a quarter without touching the treble / bass is my rglage prfr. Sometimes I go up the gain to have lgers crunches. It warms my sound so well without changing it's incredible. In addition v1 is no longer available today so I will not give my own!
Did you find this review helpful?yesno
»

Simple, only the double central knob is not practical.

This overdrive has a very good value for money, I use it for several years and I keep it always as my overdrive to do everything. It colors the sound slightly but obviously it is discrete (this is not for nothing it is called "transparent") and it complies with the sound of the guitar and that's why it's a good overdrive basis.

Always happy with this pedal, I have goods more expensive than I sold so do not rely on price, it's really good quality as the whole series Cool Cat. on the other hand of a plastic knobs did not survive a fall. But hey I keep it, especially since the V1 is no longer in nine.

Did you find this review helpful?yesno
»
Read the 6 user reviews on the Danelectro CTO-1 Transparent Overdrive »