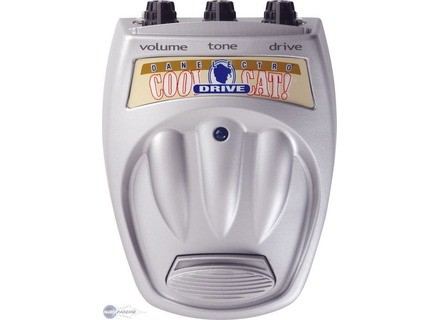 Danelectro CO-1 Drive
4
The Danelectro CO-1 Drive is a gain pedal rumored to be a clone of the Fulltone Obecessive Compulsive Drive (OCD) Unlike the “Food” series of pedals from Danelectro this pedal has a metal housing, metal input and output jacks and is true bypass. These are great upgrades without putting the price through the roof. The CO-1 runs off of 9 volt battery power or a power adapter. Also these pedals have a new look and the design is much more professional looking. Mono input and mono output, a knob to adjust the gain, volume and a tone knob to tweak with. Simple overdrive layout, used on hundreds of pedals.

Much like my review for the Transparent Overdrive (TOD) from the same Danelectro line, this pedal goes great in front of a clean amp, or an already overdriven amp as a boost. The jacks are located on the top of the pedal as opposed to the sides like most pedals, which makes it a tight squeeze getting the power plug in when using a One Spot with right angle plugs. Having all this at the top of the pedal is no big deal to me because I find it’s more of a set it and forget it pedal.

The first version of this pedal is no longer available due to the fact that it was supposedly a close clone of an OCD by Fulltone. It may be a very similar circuit, but I feel the Dano is lacking. I owned both the OCD and the CO-1, and while many people were selling off their OCD’s in favor of the CO-1, I didn’t hear what they were hearing. Hands down I think the OCD beats it out, and it should, it costs more than double what the CO-1 does. This pedal has some good light distortion sounds to it, but I would much rather use the TOD for clean to light overdrive sounds. The TOD is so transparent (hence the name I guess) and the OC-1 puts a flavor on your tone. Now I’m not saying it’s a horrible change, but it makes a difference in your tone other than just adding gain. I wish Dano would have put the dual EQ knob on here like they did with the TOD as well. You can get some rocking tones out of it with the gain maxed, but it sounds at home at medium gain levels. I feel it’s a little less organic sounding and dynamic than the OCD and out of the three of these I’d put the CO-1 in third place after the OCD and TOD

Dano did a good job with this pedal, but they knocked the ball out of the park with the Transparent overdrive. If a person was looking for a pedal with more gain on tap than the TOD and didn’t want to spring for a real OCD then this would be a good place to settle. I don’t feel it lives up to the hype of being as natural sounding as the OCD, but it’s a good little drive pedal at a great price. The CO-1 is leaps and bounds ahead of several Boss distortions like the DS-1 and BD-2 in my book and true bypass to boot, which helps preserve your true tone unlike some pedals in the price range with poor buffered bypasses. A good basic drive overall and a great value.
Did you find this review helpful?yesno
»

Danelectro CO-1 Drive
The Danelectro Cool Cat Drive is a distortion/overdrive pedal designed for use with electric guitar.  It has 1/4 inch connections and is powered with a nine volt battery.  This isn't a rackable piece of gear as it is a foot pedal.

The configuration of the Danelectro Cool Cat Drive is just about as basic as it gets.  The pedal simply has three parameters - one for volume, one for tone, and one for drive.  This is pretty much the simplest it can get when it comes to a distortion pedal as it covers the three basic parameters.  Even if you don't have any experience with distortion pedals or guitar pedals in general, I can't see anyone having too many issues understanding what to do with this pedal.  I don't have the manual for the Danelectro Cool Cat Drive so I can't speak to how helpful it is when learning this pedal, but it is easy to use and one really isn't necessary if you don't already have it.

The sound quality of the Danelectro Cool Cat Drive is pretty poor overall.  Maybe it is because I am used to using some of the best overdrive pedals on the market, but I'm not a fan of the sound heard from the Danelectro Cool Cat Drive at all.  It comes off as really tinny and has no fullness to its sound at all.  There isn't much to say beyond that I really can't stand the sounds that you can get with this pedal and ever since I tried it I have stayed away from it.

Overall, I can't really say that I would recommend the Danelectro Cool Cat Drive to anyone.  Unless you have no money at all to spend on a distortion pedal, I would stay away from this pedal.  The price is extremely cheap, but this is reflected in the poor craftsmanship and sound quality and is really just a waste of money in my opinion.  Look elsewhere for your overdrive and distortion sounds!

From a clean sound to a good distortion.

The performance is ok considering the price...

The sound is quite inaccurate... but not bad.
Did you find this review helpful?yesno
»

Fitz 5's review (This content has been automatically translated from French)

This is the highlight of this pedal, the sound, it goes from clean boost to the border with the overdrive.
Used in boost, it brings the body and the sound of grain or most other pedals are kind of "dry"
DO pricinpale it very dynamic and is extremely musical

this pedal has the best value of all the pedals I've tried, I'm happy and if it again I would do rather than twice