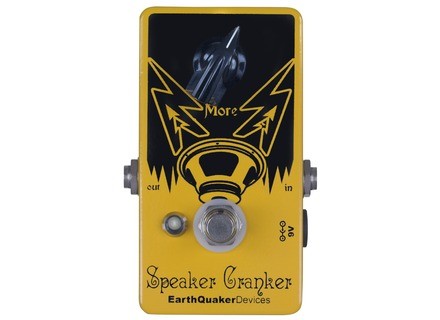 Paul Iron's review (This content has been automatically translated from French)" I Love It!"

EarthQuaker Devices Speaker Cranker
5
An overdrive pedal in Earthquaker Devices. I love this brand because it is quality shop is that most pedals are superb. So shop boost pedal / True Bypass analog overdrive. How cool: 10/10.

Good one knob called "More" I love it! I like the simple settings and there I have for my money since the only knob shaped Vox (chicken-head) is very easy to use: the more you turn, the effect is present and it works well . 10/10 for me who likes not to take my head

Well it's super quality shop so the sound is just great, the pedal effect is great! A great overdrive that you use alone or paired with another pedal. I use it all coupled with a BOSS OD-1 (yes) that one and frankly it's exactly what I was looking for. It is only a little less roots that OD-1 (inimitable for me) so it has its own character and together these two ladies give a very nervous and reactive distortion which is exactly what I wanted. So sound: 9/10 (not 10 because it is not an ultra versatile)
(I tested several boost / distortion / overdrive coupled with the OD-1 is the only one that have convinced me while I tested thirty pedals all)

I've had a few days and frankly I love it every day a little more, as mentioned above and my experience confirms It's A Long Way To The Top If You Wanna Rock'n'Roll especially to find the overdrive and that distos we meet and there bah I have my grail. I love the look and simplicity without forgetting its dynamic! Super easy to use it is just great! That's what I wanted and I got it! Frankly, it's worth the money: go for it if you want a boost that will give you a little more volume and gain to your sound and have hit a bit of nervousness in your solos or if you want a similar overdrive OD- 1.

Thierry255's review (This content has been automatically translated from French)" Good, but not for me!"

EarthQuaker Devices Speaker Cranker
4
Analog effect pedal overdrive-boost supposed to reproduce the saturation of a tube amp that is gradually push its limits.
Battery-powered or standard 9v power supply.
One type knob "chicken head" to turn to vary the saturation.
Note that the use of the knob, up to 12 hours, has a variation in the saturation between 12 and 15 hours and reaches a boost volume together with an increase in the saturation, and a slight compression of sound (compression very musical though).

There is a button!
Whoever does not do it must have traction problems

Used with 2 different electric guitar into an amp Rivera Chubster.
Compared to my other overdrive (OCD) settings on lights (OD minimum), we approach the same record. Personally I was not looking to boost volume and large saturations I prefer a distortion (one of my amp) rather than overdrive, so I do not used it in settings beyond 12 hours.
On my install, this pedal I added more acute in the engagement, which I absolutely did not want. A friend has tested this pedal on his gear and told me they did not have this "concern", so it's probably (or not??) Of my amp that was to come settings.
Another point I found that this pedal is not as good an amp to boost other pedals more "classic" distortion, it made the less clear distortion. Let us be clear, it was not the sound of porridge, however, was rendered less accurate.

Pedal used a few weeks. I tried many OD (Maxon, Ibanez, OCD, Mi Audio, Boss). From my use it has not convinced me (see paragraph above).
I liked its simplicity but small faults she had to use on my setup (especially the fact that it added more treble) are prohibitive for me.
The value for money is very good, however, for someone who would seek an OD light or average, and / or a volume boost, but not for a booster amp distortion.
With experience, I will not repeat that choice because it does not fit my needs.