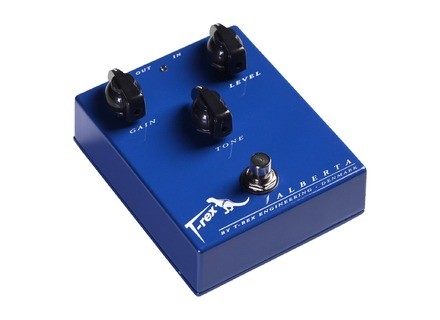 T-Rex Engineering Alberta
5
The T-Rex Engineering Alberta overdrive pedal is an analog pedal designed for use with electric guitar.  The pedal is the most similar to a Tube Screamer that T-Rex has to offer in my opinion, both in terms of sound quality and parameters.  You've got 1/4 inch connections for input and output and the pedal can be powered with a nine volt power supply.  This isn't a rack mountable piece of gear as it is a stomp box.

The make up of the T-Rex Engineering Alberta is about as simple as you can get for an overdrive pedal.  Like the Tube Screamer, you've got parameters only for gain, level, and tone.  Nothing about this pedal is complicated whatsoever and even those without much experience with guitar pedals should be able to understand everything going on here quite easily.  For this reason, a manual definitely isn't needed.

While I can't say that the sound quality of the T-Rex Engineering Alberta is the most impressive in T-Rex's line of overdrives, it does have a great overall tone.  T-Rex has put out some great sounding pedals, and Alberta is definitely one of them.  I've only used the pedal inside the recording studio, generally with a Fender Strat and either a '76 Fender Twin Reverb or a '65 Fender Deluxe Reverb, but no matter what configuration I use the pedal with it seems that I'm able to get a pretty good overdrive tone.  The only downfall is that you've only got three parameters to work with, but this isn't too much of a problem for me as I've gotten used to it since the make up is similar to a lot of overdrive pedals out there.

The price of T-Rex Engineering's Alberta is a bit much in my opinion, which is the only down side to the pedal.  Since it does have a Tube Screamer like sound, I believe the price should be comparable, although it is not.  Other than this, Alberta is an all around great pedal as I wouldn't expect anything less from T-Rex Engineering.  If you're in the market for an overdrive pedal I can't say this would be my first recommendation because of the price, but it is a pedal that is definitely worth exploring.

T-Rex Engineering Alberta
5
This is a disortion pedal with the usual level, tone and gain settings by T-Rex. Eveything is constructed very well - T-Rex style!

The Alberta is kind of the equivalent to the Ibanez Tubescreamer. This pedal has a creamy overdrive without too much bass. It does however add to the high frequencies and changes the original sound. This might not be to everyone’s liking.

As with all T-Rex pedals: It is rather expensive but the construction and sound are of the highest quality.
Did you find this review helpful?yesno
»

Turning the knobs and switches on the switch. Can not find a bad setting.
The tone is more correct to change the sound's timbre.

It reminds me a lot even though my TS9 alberta goes a little further in the gain. The sound is always very sweet to see creamy. Nickel for jazz or blues flowing well.
Unlike the TS9 she does not have this big bump in the midrange. The response to attacks is excellent and it shows a beautiful dynmaique.
I put it just behind the tube screamer in my chain effect. The TS9 providing the boost to make alberta a little less nice.

Três good pedal for everything overdrive blues / jazz. For rock fans must be very aggressive he added a little green ... or else take

Kmi974's review (This content has been automatically translated from French)

T-Rex Engineering Alberta
4
"It is a tube screamer (although they are overdrive)
-There is a volume knob, gain and tone, it's easy.

Configuration is very simple, and you can hear, turn the volume, gain and tone that sings. No need for manual to use it. I put 10 because it's easy to use

-I play different style of music, it goes from blues to heavy and this pedal is versatile enough in these areas, with the gain at 9 o'clock you get a crunchy sound very nice (it is not called for nothing alberta), noon we begin to hear the beast sing the notes and it does not bleed, and when you put it in depth is obtained approximating the style of hard rock songs of the 80s. The tone colors the sound quite well in general.
I used this pedal with my jet lag 100 standard (sacrilege I tell you the price of the pedal lol) it approximates the sounds of strtocatser for those who own one, it multiplies the possibility of guitars "low-end "(that's what I think).
on the other hand I play on a randall RG50TC any lamp, it really turns the pedal, I always say that we must use it only with tube amps and it's true because I have tried it on a Marshall MG15 for my friend, it sounds terrible.
it can be used as a boost pedal in either clear channel or saturated and yes it works very well.

-I bought it in January.
"It is a very good pedal, the distortion it gives is perfect, even at the bottom it does not bleed, for I regret that against the gain is not pushed enough.
-I 've not tried another of the same model.
"It is very expensive I think, I paid € 199 more expensive than a TS9, but hey it was worth the shot. For it does not deliver against the transformer, for the price they could make an effort.
Yes I do it again but this choice can be for a better price.