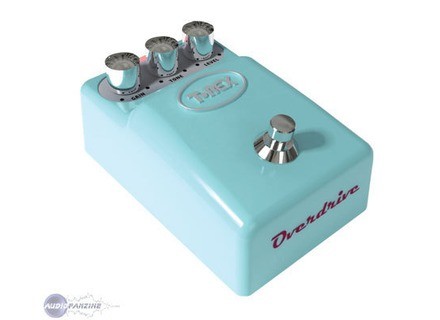 T-Rex Engineering ToneBug Overdrive
5
The T-Rex Engineering Tonebug Overdrive is the simplest and cheapest pedal that T-Rex has the offer.  It has 1/4 inch connections for both input and output and requires a 9 volt power supply.  It is an analog unit that definitely has the vintage look and sound.  This isn't a rack mountable piece of gear as it is a stomp box.

The configuration of the T-Rex Engineering Tonebug Overdrive pedal is about as simple as it gets.  The pedal has parameters for gain, tone, and level and beyond this there isn't a way to control your tone.  For me this is fine as it makes the pedal incredibly easy to use and I don't believe that it sacrifices any versatility.  I've never seen the manual for this pedal so I can't say anything about it.

The sound quality of the T-Rex Engineering Tonebug Overdrive is top notch.  I love the sounds that I get with it for recording as I find that I can get a number of different overdrive tones that are all vintage sounding and quite realistic.  I have used the pedal with a Fender Telecaster and a '65 Fender Deluxe Reverb, and I feel that this is probably the most appropriate setting for this pedal.  I can't think of any pedals that I would compare it to tone wise exactly, but I would say that it has a sound some think like an Ibanez Tube Screamer.

Overall, I'm a big fan of the T-Rex Engineering Tonebug Overdrive pedal.  While T-Rex definitely has some better sounding overdrives in their collection than this one, for the price this can't be beat.  It is an underrated pedal as I feel that those who know about it often compare it to the more expensive pedals that sound better in the T-Rex line of pedals.  However, when compared to pedals in its price range, this is truly a gem.  If you are looking for a great sounding overdrive pedal for around $100 USD, definitely keep an eye out for the T-Rex Engineering Tonebug Overdrive pedal.
Did you find this review helpful?yesno
»

Le_reskapé's review (This content has been automatically translated from French)

level
tone
gain
a switch that does not plop. trs pleasant

a big red led many visionary behind the knob.

the pedal is solid and there is a door under the pedal to the battery.

apparently the pedal is a dot buffer.

in sound, it's a good overdrive so it will not rev far, gain level I would say that it is a bit more than a tube screamer lev. in sound we are in the same spirit, a mellow overdrive, trs bluesy with a cot a little tight cras as TS but less pronounced nonetheless. the highs are not tinny and the medium are less pronounced lair and I was better defined, especially with the gain pushed. It sounds thick, fat, thick, soft, quite dark and muddy.
Tone knob of I is quite strange, on my gear (and telecaster vox ac4) must pass the 3 / 4 of the race of the Tone knob so that the sound is not too dark. this may be due to my config.

The report price is good quality. for a little less than 100euros we have the right to pay the same low quality as its big sisters of the same brand that cost two times more

for the person seeking an overdrive clear, sharp, transparent, modern or something, go your way.

for he who seeks an OD soft, thick, muddy with its more oriented for the blues, it would greatly please you.

departing I was not convinced by this OD, I put up for sale 2h APRS have reu. (I prefer the clear OD)

but finally I got it attach a sacred charm.

PS: the volume of the pedal really needs to be poss to ring. like a tube amp, except it is not <img class="smiley" src="/images/audiofanzine/interface/smileys/icon_lol.gif" alt="" /> So to play a small volume in his room are best avoided. there are pedals that sound good trs a low volume, but this is the case of the aps the

DukeBD93's review (This content has been automatically translated from French)

I just liked a second switch to boost during the solo but hey can not have everything ^ ^.

well then, if you had a good amp and good microphones, you are propelled into the Roaring Twenties rock, a sound very vintage released the album Highway To Hell ACDC or song Good Times Bad Times for ledzep. It colors the sound a bit but found a way even though the nuances of its light is hidden underneath. by use of a boost it will color distortion sound in a more vintage which is quite nice I think, and again the Level has a large output to stay balanced with my clean sound I am obliged to put the volume pot 10am.
I play it with a les paul epiph.

I use it for a little over a month. I tried a multitude of gender effect: TS9, blues driver, OD3, Tech 21 British ... etc but this one I liked the fact that it sounds pretty personal.
What I like most is the color brings the mixture tone / gain.
The quality is quite good (cheaper would have been good but came good ^ ^). I would do without hesitation that choice

Published on 12/11/08
T-Rex Engineering is about to introduce its new Tonebug line of vintage-oriented effect pedals at January 2009's NAMM Show, including the Tonebug Overdrive.