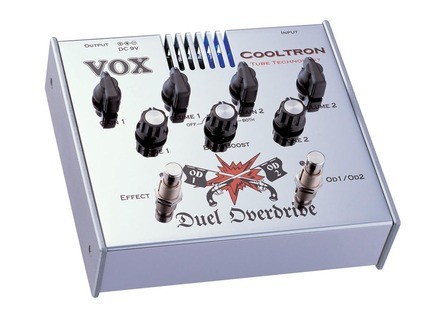 Duel Overdrive, Overdrive pedal from Vox in the Cooltron series.

surfy's review (This content has been automatically translated from French)" It's not two big ben, but not bad"

Vox Duel Overdrive
4
Dual tube overdrive channel with gain, volume and tone for each, the two channels being engageable foot.
Standard 9V power supply (watch this kind of pedal tube is sensitive to a good diet)
There is also a bass boost (which is not present on the Big Ben), at the beginning you wonder what is it and after you understand (see below).

Product no longer manufactured by Vox, as the whole series COOLTRON.
Vox indicates, however, have used the same circuit as the popular Big Ben duplicate: so I told myself it was worth the space for the shot to have 2 channels!

Yes because it is a fairly big pedal like all others in this series (equivalent to 2 Boss pedals side by side.

The use is excellent, the switcher can be two channels without problem. No need for manual for it.

Then he'll have me to be precise.
I compared it to the Big Ben, who is my overdrive reference. I really connected the two pedals to be sure to compare them with the same settings also.

Let me say first that the sound is very good on the Duel. It is very similar to that of Big Ben.

BUT, it's not exactly the same sound. There are (to my ears) a slight loss in severe Duel. Hence, I guess, the mystery of the button "bass boost"! Note that I have compared with the same lamp that I spent one pedal to another. (A gold pin 12AU7 EHX).
This proves in passing that in this kind of pedal lamp is not everything.

So I would say to choose:
- If you use (like me) not too far a overdrive, crunchy, and want to keep it "pure", it is better to Big Ben (I actually sold my Duel)
- If you use a distortion and want to push two channels (1 + a solo drive for example), it is better to take the Duel that will manage to live without worry. For in this config "surge" will be heard unless the difference.

Please note the distinction between the two pedal is minimal. In my opinion live with a group means not tell the difference.

I did not keep it long, just long enough to compare it to my big ben (I would have kept the two if I could, but it takes up space where these beasts).

Again the sound is very good, but I think the best Big Ben keeps the original sound, although the distinction is subtle (group I think we not hear the difference).

bronson's review (This content has been automatically translated from French)

There's no simpler: each channel gain, a tone and volume. Two switches: on / off and OD1/OD2
The manual is dbile (thank you vox) but it's so simple, just plug in and search.
I put 8, ca t would not hurt to have qques suggestions from Vox, but at the same time, what a pleasure to look alone!

Uses between a LP and a JTM60.
Silence, the sound is exactly what DEFINITIONS and love. Lamp pure and hard, really Ractive all, to play, the SETTING THE scratching of the amp, the knobs. It's an overdrive pure juice, not a distortion. The PDAL is type 60's and 70's, from blues to rock hard velvet (ledzep, Kinks, Buchanan, Beck, Whos, Stones ,...).
I

Used for 4 hours and 5 sweeps neighbors
I like the sound, sound, sound and sound.
I turn for a long time, starting from the TS to EHX. L I found is happiness.
It's expensive, but sound is aa beautiful and feels solid.
Yes, I would do the same choice and my neighbors too.

marmotjoy's review (This content has been automatically translated from French)

Vox Duel Overdrive
5
Overdrive 2 channel adjustable lamp sparment a bass boost, a switch on / off and 1 for channel selection

A classic pedals at the rglages, manual really delivers for dir there is a manual

The claque !!!!!!!! It is subjective but to me sounds perfect on my arm and my lespaul gretsch hot rod. The gain is 100% effective, ie that whatever position the overdrive is nice and prcis and clear. In fact even the bottom, if you play a deal you can hear every note and no time the sound turns to mush. and the tone is pchu is fully effective, it is never garish even by pushing the treble. The two channels are completely identical so that the transition from one another homognit you keep a sound that often default when using two pedals Different. The bass boost, an option that I met for the 1st time is standard, only BMOL normment it increases the volume so it must rergler the pedals if it triggers, damages for use live, you have to keep it enables or disables you from having just need a channel with and one without (I recognize that I am picky trs) .

I've had three weeks and I finally found one that satisfies me overdrive (I have a dja 10aine distos-overdrive accumulated). The gain is not supersonic but it's so that there is no need pchu and suddenly it becomes clearer I learn to play the game with less gain than my old distos but ultimately it more beautiful and pchu

matchoucampos's review (This content has been automatically translated from French)

Vox Duel Overdrive
5
Overdrive lamp powered by batteries or 9V (which is rare). Two channels available, I did not notice any difference between the two channels set equal (not no more I'm testing a very long time). For each channel on the possibility to adjust the gain, volume, tone and also a boost of bass (rotocontacteur to select channel 1, channel 2 or both channels for adjusting boost).
A footswitch to trigger the effect, a second to select the cannal.
An input and an output jack.
It's tough, but ultimately, it's beautiful but it's messy

When connecting the pedal, a small light blue appears in the lamp is a detail but it's very pretty. He or no off button on the power of the pedal.
Operation is very simple! You turn the knobs and it sounds. There are very quickly looking for the type of overdrive.

The sound is very very good. The big advantage of the two channels and provide many opportunities. The simple boost its clear overdrive pushed through the crunch it sounds! And when we found her, was the second cannal to find another one, that's really great.
One thing that surprised me is the noise! The pedal is very quiet I think.
However I was very disappointed by the boost! I see absolutely no point in this setting. It makes the draft. On a large disto I understood but one overdrive ... Finally it's my personal opinion! I put a 9 because of that
However do not expect to have a big distortion! As the name suggests is an overdrive. J say that because someone used it in a store is she was disappointed about the level of gain. Do not expect to have a metal distortion.

Very good pedal. The sound is very round, I love this pedal to the blues.
It is imperative to try.
Nothing to say at the packaging or the quality of the pedal.
However the price .... still quite expensive when it is new. So it's a pedal that I bought used.
Nine for the price however the transformer could be supplied with! I put 9 for that!

Did you find this review helpful?yesno
»
Read the 7 user reviews on the Vox Duel Overdrive »