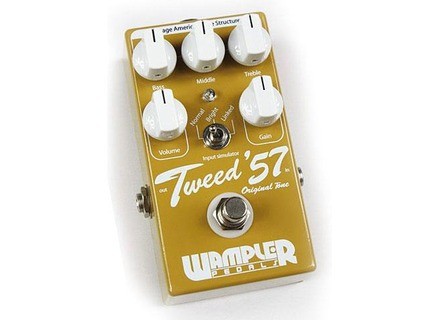 rhum66's review (This content has been automatically translated from French)"A mutitude of "characters" tweed herself."

Wampler Pedals Tweed '57
4
Pedal more complicated than a tube screamer, family she does not belong elsewhere. It is usually classified by the press and the experts in the "amp-like" category, in good French "style amp machin- thing. "
-Complicated by a management equalization three bands is not simply an addition / removal of traditional frequency, but to think like "the more I turn the knob, the higher the frequency in question will be affected by the effect grain tweed. "
In essence this means means that for a given level of gain, I can totally affect the lower (by gain), some mediums and not acute.
In reality, therefore, I would lower my disgusting way tweed, fat-saturated and treble almost clean mids.
And vice versa, depending equalization implementation.
Once this is understood, we can begin to work.

-A note in English is provided with three or four settings, it helps to grip at first.
-Given what I have just written on the equalization, you can expect the multitude of possible adjustment ...
Multitudes of-EQ settings need "re-cross" with the mini switch has three positions:

Normal-Mode, with an average dynamic rendering without excess, like a big tweed snoring "crunch" but quiet, ideal for stonniennes Rhythmic (Midnight rambler / get you out ya ya).
-A fashion "bright" with a highlighted acute reminiscent of the "rare" side sounds of bassman, pushed into the retrenchment by Buddy Guy, this key treble that size in the mix, however, and according to temper type microphones fitted to the guitar driver.
- Mode "linked" in French, "link" between the two channels of the bassman, as is done to mix the two channels on the real bassman with a mini-jack input 1 through channel 1 and entry 2 deux.Ce channel mode is a real "killer", look no 12:00 to 2:00 p.m., is "to gain background" he gives his best and coarse tweed.
-GAIN:. To add the famous grain "tweed" If with single coil it is very scalable, it becomes far less subtle with double or P90.
The gain range is very close to that of a Fulltone OCD, much further than a tube screamer.
-LEVEL. Input level to the amp more you want to play clean, the longer it will favor the side "boost" pedal, ie, more "level" and less "gain".
In essence we can play very easily saturated at low volume (just as with a master), while "clean", it will take a more elevated level, play louder.
This applies especially playing in their room, the other embodiments (studio or scene) playing loud anyway for th remark did not value.
-See below the post that I had at the time set g.com:

I just acquire a tweed Wampler 57, it faisiat long as I wanted a tweed pedal like to smear my Fender Deluxe Reverb RI 65.
Two words for those who are asking questions about it.
I chose it over the way Huge "red llama" and Lovepedal "high power tweed", after a comparative test of nearly a half-hour on a Tone King "Imperial" superb.
By the way, I thank "pedal" to Pigalle for the comfort of the test and the friendly advice exchanged.
The Lovepedal struck me as very "bright", something that I think would have been a problem with my deluxe RI revrb 65 bright enough, so she was quickly ruled out, the absence of adjustable tone finishes convaince me Despite a very good sound overall.
Initially, I wanted this one ....
Verily the red Llama sounded "very natural" with a very nice grain, no compression but no correction tone as well, so that very little of the basic very well go as not according to the amp and the chain ... .
The wampler sounded more compressed than other hair, but multiple adjustment capabilities and adaptations have finished to convince me, as well as the "link" setting which is incredible when you push the pedal in these retrranchements.
My deluxe reverb "snoring" tweed way now ... with the typical grain, the boundary of the fuzz with this extraordinary grain that we seem to hear "explode" directly.
I have yet to try this pedal with a 808 TS in front in clean boost, I&#39;m sure it must "tear" more.
If the pedal readily accepts single-coil pickups (strat), I was quite disappointed with the P100, but I did not take much time to find a proper setting.
My first impressions:
-EQ: Bass 3/4 medium at noon, treble at 1/4 (must give a lot of bass ...).
-Volume: 2 hours mini (ie strong enough in fact if the deluxe is on 2 ...), the pedal does not sound if it does not properly kick your ass amp.
-Gain: from noon to sound bassman to buddy guy (with the mini switch on bright), and between 3:00 and 6:00 (bottom) with the "linked" to the neil young / stones or his tweed really "torn."
In under three hours, the clean sound bassman, ie, a clean & a bit inflated medium, as the supersonic 22 (switch "bassman".).
Am delighted with this miracle (sound tweed box for 200 Euros).
No problem of "bright cap" between 65 and Fender DRRI pedal.

-The only criticism one could make him: less subtlety with humbuckers or p90 for which the settings of "gain" for light Crunches are very difficult or impossible, whereas with simple was this beach setting that allows for the clean sound a little big of bassman, and also the limit of its breakup.
This means in synthesis with double or p 90, it will be hard to have bassman "clear" however we will crunch affirmed beautiful.
-My and my config setting. preferred: a good stratocaster, "linked" mode (the mode of killer tweed), bass background, mediums three-quarter, and treble on the quarter: there was a sound very close to Clapton when he buggers her twin amp in these limits. (See he had on his reformation Cream).

Below the video I made of my stuff:

-An essay on backtrack, 180 tempo shuffle in mind freddy King with a guitar ES-like:

-I play this pedal for very little time, I have many "fantasy" ... over the sound tweed, legend, neil Young, the stones, the melody of "dead man", the clean sound skinned buddy Guy, the sound "exploded" the twin amp Clapton with Cream, etc ... if she knows just restore meadows these universes, this will also depend on a lot of factors, the receiver where it goes, the chain of effects (I personally have a small boost / OD / delay chain), patience setting, microphones guitar etc ...
For my part, I see it as a set OD "gain back" or normal mode for rytmiques neil young-stones either "linked" to the lead perforating way Clapton, or last option in "bright" for lead way buddy Guy.
Live, you have to choose between these three uses.
A very good pedal, complex, quite impressive in terms of concept, but not at all a miracle in itself.
The inverse of a "red llama" simpler and more "plug n play" but no less excellent.

Wampler Pedals Tweed '57
5
For those who love good vintage rock sound, this pedal is essential!
A plan to Clapton sound to Neil Young, a riff Creedence? Do not worry, this pedal is made for it.
The Wampler Tweed'57 aims to reproduce the sound of the legendary Fender Tweed 57 but with a much more affordable for the ordinary budget ... I bought mine new in the U.S. and even with shipping, I won 50 euros (minimum) for the price of stores in France.

The configuration of this pedal is ultra simple "plug and play" as they say!
Very versatile thanks to its 3-band EQ Bass / med / high, 1 gain knob, one volume knob and one small switch in the middle to reproduce the simulation input (normal / bright / linked) as the Fender of period.
It is also a true bypass pedal.
A manual? Need a manual for this?

The side of the sound is stunning! Well, the purists will say of course it is not the Fender time but it does it anyway!
With the switch in the "bright" position was sound with brilliance so typical of Fender amps, so nice for country plans and the like, the "normal" mode is the one I may be using the most, with a more warmth, and "linked" mode (similation of two inputs as bridged on the amp) it is more punchy giving a boost and then it sends the sauce anyway!

I have this pedal for 3 months and I admit it's a great overdrive.
Before I had a boss SD-1 + the vintage Boss OD-1, but since I replaced the SD-1 is the day and night.
A great pedal to try and maybe compared to the Lovepedal Les Lius with which I hesitated but for those who do not have the means like me to buy the real Fender Tweed (and already have to find a !), it's still a super good compromise within a reasonable budget.
A choice I do not regret and I do it again without hesitation.

KirKill's review (This content has been automatically translated from French)" Cocaine ..."

This time the guys they touch the holy grail of overdrive, the Fender Tweed 57, I expected this pedal for a while because I wanted to take this legendary amp and for me the test is more satisfactory than that found drive well with the brilliant twist slightly fuzzy / dirty it's still very melodic and beautiful realistic crunch out what is rock, blues, country ... plans to Clapton, Rolling Stone, kravitz out really well, for the fans of vintage rock, coupled with a TS9 was a super wide range of sounds, it might miss some dynamics, good after all depends on the amp
Bright mode adds shine to the sound it is the mode that I use most with occasionally normal mode, it depends on the guitars, the linked gives the boost / gain good there is still plans to more couillu it spits more ... P

I use it with a fender 65 as I found the overdrive tweed above the 57 shot I need to go take this amp in the store, in times of crisis it is an economy, P
The value for money is ok seen this offered the gear I would do without hesitation, to test emergency for fans of vintage rock