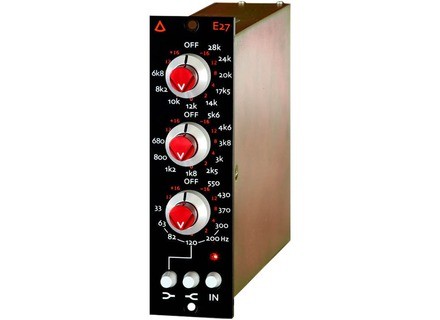 Avedis Audio E27
5
The Avedis Audio E27 is a 500 series semi-parametric equalizer. It’s not unlike that which would be found on a Neve console, as it’s definitely following the same sort of format as has a comparable sound as well. It doesn’t have any connections of it’s own since it’s a 500 series rack, and will of course only fit inside a lunch box/500 series casing.

The make up of the Avedis Audio E27 isn’t too difficult to follow, and it will certainly help if you’ve used Neve console EQ’s before since this one is so similar. It’s a three band EQ, each of which has about nine different fixed frequencies to choose from. Each also has a gain knob as well for setting your level either way. The bottom and low EQ band also gives you the option to use it as a high pass filter with it’s own Q button. There is also another slope button that applies to the two other bands. I haven’t had a need to look at a manual for the E27.

The tone of the Avedis Audio E27 is awesome across the board. It’s definitely a versatile EQ, as I wouldn’t hesitate to use it in almost any situation. Perhaps it’s because I’m so used to using Neve EQ’s, but I just find this so easy to use, and therefore incredibly easy to get the sounds I’m trying to get with it, which after all is the point. It’s definitely got the same sort of vibe sound wise as well, which is certainly no accident. It’s so easy to thicken or clean up sound with the E27 as I’ll go as far as to say that I’d rather use it than almost any other 500 series EQ.

If you’re looking for one of the best 500 series parametric equalizers for your 500 series rack, look no further than the Avedis Audio E27. I’m also a huge fan of the MA5 preamp, and using these two together will pretty much give you the sound you’d get with a Neve channel strip. While definitely more expensive than most other 500 series EQ’s, there’s always a price to pay for the best…