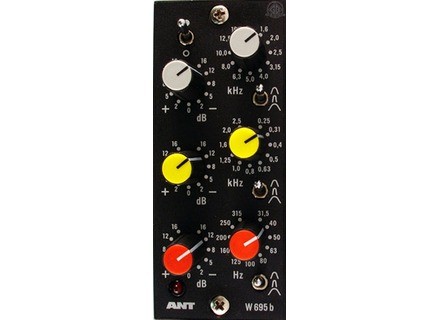 Telefunken / Siemens ANT W695B
5
The Telefunken ANT W695B's are parametric equalizer modules that were originally from some kind of Telefunken console. Admittedly I don't know too much about the origins of these modules, as I don't own them and have just used them in the studio that I work at. We have a set of two of these EQ's racked in it's own custom casing and power supply. I don't know exactly who racked them up, but in order to use these outside of the console you'll need a custom rack and power supply for them, as is the deal with anything from a console.

If you understand the basics of parametric equalizers, using the Telefunken ANT W695B's will be easy. I think it's pretty safe to assume that you probably know a thing or two about EQ basics if you do indeed own these or have used them before. The ANT W695B's are basically three band equalizers, with each band consisting of separate frequency and gain parameters. Each band also has a three way bandwidth (Q) switch that has setting for a small, medium, and wide sized bandwidth. Everything should be pretty self explanatory here if you know the general make up of parametric EQ's, as this one is pretty standard.

The Telefunken ANT W695B's can get extremely precise, making them ideal for equalization during mixing and at times when you'd want to get as direct as possible. They don't color your sound at all beyond the way you decide to affect the signal, and in general these are some of the cleanest sounding equalizers that I've used. They're easily adapted to any situation, as I don't think there is an application that I wouldn't try them for. The frequency selection for each of the bands is vast, which is what makes them so versatile...

You definitely won't find the Telefunken ANT W695B around too often, as saying they're rare is an understatement. However, you will see them every now and again and I've been lucky enough to work at a studio where they've got a set of these on hand. I've only had the chance to use them on a few occasions since they are a floating piece of gear in the studio, but every time I've used them it's been a real pleasure. If you ever get the chance to try or buy these and it's reasonable, you simply couldn't go wrong with having these rare and classic Telefunken EQ's around.