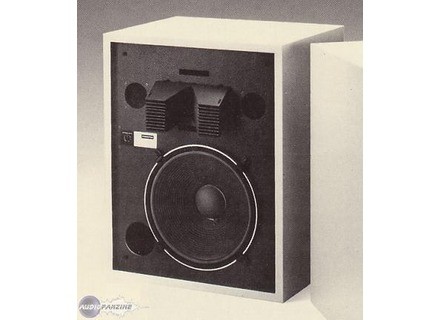 JBL 4331
3
The JBL Pro 4331s are a pair of passive studio monitors and they need to be powered by an external amplifier, since they are a passive set of monitors. I don't know what type of amp I have used this with, as it was pre set up in the studio I use them at and not sure what type of amp runs it. While these monitors project a decent sound, I'm not a huge fan of them overall and do not think they are suitable for mixing. They are best suited as simply another set of speakers to check a sound on.

To me, the JBL Pro 4331s don't portray an accurate sound, as the mid range is simply too loud. There isn't any low or high end definition, which is essential for mixing, and more than helpful when monitoring. The stereo image is fine and satisfactory, but they don't present a clear signal all along the spectrum. They sound muddy and clouded, which is not the usual when it come to JBL speakers, but I'm not a huge fan of the quality sound of the 4331s.

I've been using the JBL Pro 4331s for about a year and have not been convinced that these are a great set of studio monitors. They don't have a great sound quality overall, and aren't suitable for mixing as they don't cover the full frequency spectrum well. The price of these used isn't too expensive, but I don't think that they are worth any price, as there are ton of other great studio monitors you can get for a cheap price. JBL usually makes some good sound speakers, and have a reputation for making high quality products, but the 4331s don't live up to this reputation. Overall, the JBL 4331s are a disappointing set of studio monitors.
Did you find this review helpful?yesno
»

JBL 4331
3
A 4333 2-Way, Tweeter least 2405, and it is sorely lacking because the engine equipped with a medium of his trunk, even unfiltered top, unfortunately can not do anything ....

The other parameters are identical

It is always possible to make it evolve by adding a tweeter on the outside, but as a look ... at least 4333 to touch at a ridiculous price in exceptional condition.
Did you find this review helpful?yesno
»