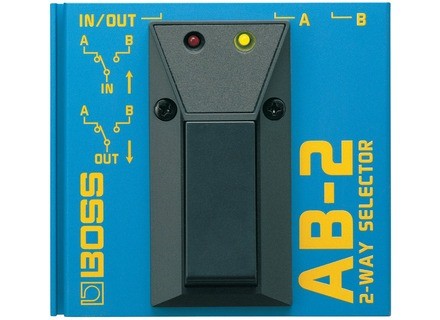 Boss AB-2 2-way Selector
5
The Boss AB 2 is a two way selector pedal that allows you send your signal to two separate outputs or to send two inputs to a single output.  This is helpful for a number of reasons as you can send your guitar to two different amps or you can send two guitars to a single place like a tuner or specific pedal or amp.  I love having this pedal around as it comes in handy quite often, especially when I want to have quick access to two different amps.  The pedal has two 1/4 inch inputs/outputs labeled A and B and another two 1/4 inch connections that depending on the way you have set it up, will be either inputs or outputs.  The foot switch and LED lights are easy to use and understand, and overall the pedal is easy to bring around because of its light weight.  The pedal requires two AAA batteries and the pedal has true bypass so it won't change the color of your sound.  This is a huge feature because for me it is vital that my tone isn't affected negatively by the pedals that I am using because I often use a clean tone.  I haven't really used any pedals that are exactly like the AB 2, as the other AB boxes that I have used only have the option to go from one connection to two and having the configuration like the AB 2 opens up a whole new world of possibilities.  The price of the Boss AB 2 is quite reasonable as it is cheaper than most effects pedals out there while still maintaining a high level of quality.  I trust Boss to make top notch pedals and I would definitely say that they didn't miss their mark with this one.  Overall, the Boss AB 2 is a pedal worth checking out if you want to have more options in terms of routing for your instrument.

Boss AB-2 2-way Selector
4
I had a pair of these for three years. What I liked about using these pedals was putting one on each end of my effects chain. That way I could run my acoustic guitar to my acoustic amp or my electric guitar to my electric amp but still use the same effects. All I had to do was click two pedals and I was ready to go. Great asset for live situations. What I didn't like was that they are battery powered only. I don't like the idea of having to rely on batteries only, I don't know what they didn't put a power jack on this. I have a boss tuner pedal and it would have been nice to have powered the AB's with that. I didn't not try other pedals because I couldn't find any in the same price range. There is a german company who makes much nicer version of these, but they are around $300. I think the company was called &quot;Lehle.&quot;
These are great for only $35 a piece. I would definitely recommend this to anyone switching between two guitars, two amps, or both like in my case. Yes, if I couldn't afford the nicer versions, I would.
Did you find this review helpful?yesno
»

millezotla's review (This content has been automatically translated from French)" Practice, but ...."

Boss AB-2 2-way Selector
2
I use it for a few years now! I spend a channel of my amp vintage type to another. I made another use. I plug my jamman on output A and an amp. On the output B, I plug in a second amp or I play solo.
I give a very average rating because the pedal can operate without a battery. Forcing disconnect whenever the jack to avoid discharging needlessly. When the battery is not great, the sound becomes disgusting, see more of her and can not change the channel. This pedal is probably not transparent. I'll see if I find something else.

Boss AB-2 2-way Selector
4
_ Cheap, strong, neat and compact inside: the Boss!
_ The A / B = OK, trs and transparent (Bote like passive signal near TruBypass
_ Trslger plop switching, but OK
(ISO = Signal Switching PhotoMosFET # 30 Ohms, i / o going in 2 directions, but the common masses)
_ ISOLATION: chssis mtal = NOT isolated from the masses 1 & 2 out, which are common
_ As against the Alim (via 2x1.5V AAA round cells) are isolated from the masses = ok Anti-50Hz hum. (Cest quil need for a battery ..!)
** BATTERIES:
_ The only annoying point, because even when consumed as 1xLED lights always! (They say 100200Heures: I tank ...
_ Have been a change: put a 910 Ohm Resistors in SERIES with my Alim Pedalboard 9Vdc external, to go to the Battery + = 2x1.5V = 3V! (Power supply current 5.5mA # TOTAL consumed)
Edit OK nickel: a hum-free operation because my output is isolated from other 9vAlimPedal! (My IS VoodooLabs Alim, PedalPower2 +)
_ If External Alim not an isolated attempt to replace 2xPiles 1.5v for 1.2v 2xAccus classic: a limit, but should be OK .. test!
Did you find this review helpful?yesno
»
Read the 6 user reviews on the Boss AB-2 2-way Selector »