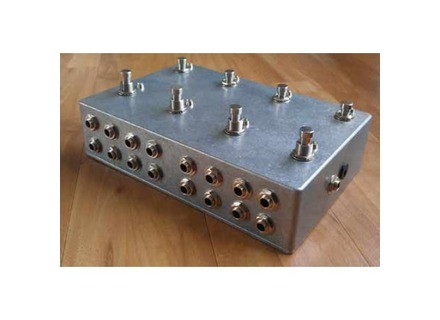 Entry and exit to the right to the left, to the right power supply socket (you can choose the layout in the control position of the LEDs above or below the switches for example).

I fed with an output of my PP2 + and I have no idea of ​​its consumption (I took a 250mA output and I feed my PolyTune looper +) is nickel.

I / O loops are rather tight, logical given the size of the box, just to say that we should forget the pancakes example is GL's or Lava style mandatory.

Programming is a breeze.
Is chosen for each of the 8 switches: program (combination of several loops so) or on / off (day / night loop that corresponds to the switch).

To switch from one mode to the other, press the switch 5 seconds. When released, the LED will flash 3 times quickly.

In programming mode, you press the desired switch for 3 seconds and release the LED will flash 3 times and looper slowly waits.
Then you press the switches that correspond to the loops you want to activate this program, each loop chosen LEDs illuminate.
Is pressed for 3 seconds the switch program 3 times reclignote it slowly and it is registered.

No loss of sound is transparent, it touches anything.
No buffer that will break the c ****** s an old fuzz capricious example.

The only complaint, which is not in me but I mention this because my bass I remarked and indeed, it can be confusing for some.

For example, on my program 1 (bottom left switch) I loops 5 and 6 are active. Led the program switch is not turned on, only the LED switches 5 and 6 are. I do not mind it but I understand it can be confusing, to say so.

So, the trick is guaranteed for 2 years, you can choose the color of each LED is built like a tank Leclerc and the guy who responds to emails is very knowledgeable and friendly.

I take 2 points to the story of "preset not displayed" even though, as already stated, it does not bother me personally.

The rest is all good.