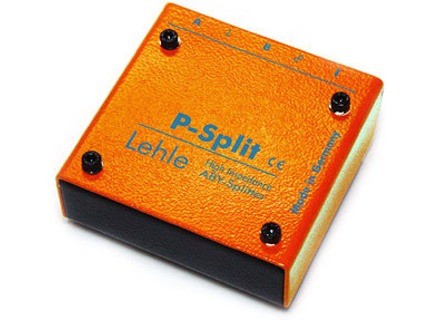 mutanzero's review (This content has been automatically translated from French)

Lehle P-Split
5
Information sute or I bought it
Lehle P-Split II
Passive Splitter With Simultaneous Routing of one instrument onto Two Amps,
Output A is separated by Galvanic High End Output Transformer LTHZ from B -
Humming are impossible.
The IS LTHZ Created for Special Use at high-impedance Report.
Additional the P-Split contains a goldcontacted Phase-reversal
and a ground lift-Switch.

That's exactly what I expected

It is a splitter, so nothing complicated
You branches A,
Food 2 elements and you (Head Amp in my case)

there is a manual but it is useless anyway there is nothing very complicated!
Childish!

There is no deterioration of sound unlike the A / B box morley brought me a hum. there is nickel Krome

If you have a problem, there is a phase reverse button, just press it and voila!

Exactly the kind of pedal that I do not regret buying because it is completely transparent, and so useful!

As mentioned earlier, I had the A / B Box morley, but there is something else, it's really VERY good stuff, no worries!

100 Euros for a signal splitter that can be expensive but I consider its acquisition after having played in a festival or Morley made too much buzz, and since disappeared!

If it disappears one day I resume a Desuite!!