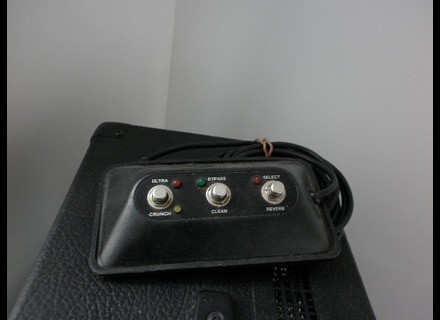 Ultra Footswitch, Pedal/Controller from Peavey in the Ultra series.

Peavey Ultra Footswitch
3
Back in the summer of 2009 I got my first tube amp, a Peavey Ultra 2x12 Combo. It came with the matching footswitch, which is what this review is on. I'll get right to the point. It's TINY. I'm not really sure why Peavey thought they could comfortably cram three buttons on it, because it really is only big enough for two. That was my biggest complaint about the amp, and it's the same way with a lot of people.

That being said, the switch was built well using good components and held up for the period of time I used it in it's stock form, which was about a year and a half. What I ended up doing with it was buying a broken Marshall TSL 5 button footswitch, and gutting it and putting the guts from the Ultra's stock footswitch into it. I used the other two switches for external control switches for effects, etc.

I was pretty impressed with the quality of switches Peavey used in this, they were MUCH better than what Marshall used in the TSL switch. The wires were long enough so that I didn't have to clip them and rewire the entire thing when I moved the switches to the wider hole spacing of the TSL footswitch shell. Now that I've got it in a decent sized footswitch housing, it's much easier to use. Not sure why Peavey didn't put in a bigger one in the first place though.


Overall, it's a well-made footswitch, though much too small. I've got size 13 feet, and if I wasn't careful I could hit all three switches at once. It's a common issue, there are threads all over the web with people complaining about it. I rated it at 6 due to the size, because it is almost crippling on stage. Once you rehouse the guts though, I'm sure this switch will last you a long time.
Did you find this review helpful?yesno
»