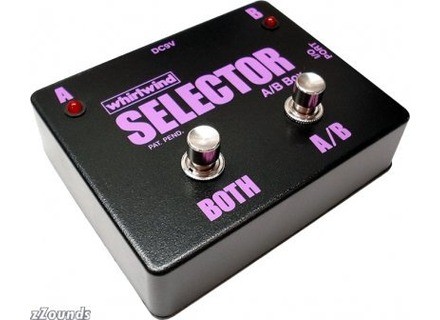 Among the most basic, yet most effective of their products is the Selector A/B signal switching box. The Selector uses a patented circuitry that operates via 9v battery or optional adapter, and allows totally silent, multiple direction switching. The Selector is built into a sturdy Hammond enclosure, and utilizes two Carling barrel footswitches to switch between output A, Output B, or Both at once. LEDs indicate which pathway is active. This allows you to use your guitar with one or two amps, or two simultaneously. I encountered no signal degradation when using the A/B Selector with reasonable length cables. I was able to successfully route my guitar to two amps, switch between them with no noise, and use them both with no signal delay.

Conversely, you can also use the Selector as a 2-to-1 switch, use two inputs into one output. As an example, I can route two guitars to one amplifier.

The interior circuit is all analog, using Vactrol opto-isolators to keep the signal paths separate when necessary. The unit is easy to repair when something goes wrong, and Whirlwind has outstanding customer service. That being said, with reasonable cleaning and care, the Selector should last you for quite a few years.

My only complaint is that the LED indicators are both Red, and I typically modify my Selector with a Yellow or Green LED So I can tell at a glance which signal path is active. this is fairly easy, since the LED's are mounted to the Whirlwind's enclosure and soldered to the board with flying leads.

I'm not particularly a fan of the 1/8 phono plug style 9v jack either (this is also used on such pedals as the Ibanez TS-808), and I personally prefer the 5mm x 2.5mm barrel jacks typically used on stomp boxes.

The Selector has in recent years been joined by some rather high-end switching solutions, such as Lehle's P-split and ToneBone's headswitcher, but the Whirlwind Selector remains a simple, cost-effective solution to your multi input-output needs. In my opinion, the Whirlwind A/B Selector should be a standard part of every guitarist's accessory collection.
Did you find this review helpful?yesno
»

Whirlwind A/B BOX
4
The whirlwind A/B selector is like having 2 switching units in one box. You can use it with 2 amps and be able to switch between the 2 with a press of a button or use it the way I use it with certain effects. I have channel A connected to my amp while channel B is connected to my talk box. In this configuration, I can either play my amp, the talk box or use both at once! Being in a Bon Jovi tribute band, this becomes VERY helpful and useful to me. It can be powered by a 9 volt battery but I prefer to use a wall wart I bought at Radio Shack as you have to unscrew the back plate to swap out batteries.

When using the pedal, I hear no clicking or popping at all when switching between channels like you get on some other cheaper switchers. The housing is pretty sturdy metal and seems rather rugged. I wear a size 12 shoe and have yet to damage it. I tried a morley a/b box before the whirlwind and the quality of sound isn't even close. The morley wasn't as quiet or as sturdy. I found myself worrying if it would break down in the middle of a gig. I don't have those fears with this product.

For such a simple pedal, the $50 I paid for it may seem high. I don't agree...I would probably pay more for it now that I've used it for years. It's gigged with me for over 400 shows now and counting. It's a piece of gear that kinda pulls my whole rig together. I'm glad I found it at the time and ended up testing it out. I would definitely buy another one if mine ever broke or was lost.

Update: I am now powering the pedal via a Voodoo Labs Pedal Power 2+...works PERFECTLY! No more wall wart!
Did you find this review helpful?yesno
»

Whirlwind A/B BOX
5
The Whirlwind A/B Box is a two way selector in the form of a foot pedal.<span> </span>It simply allows you to send your signal to two separate locations, with the ability to either choose one or the other, or have both on the same time.<span> </span>I’ve used this pedal with an electric guitar and two different amplifiers, which is probably what most people will use this for.<span> </span>However, it can be used for any configuration of your choosing, as there are a number of different ways that I can see this being useful.<span> </span>You can also use it in reverse if you want to send two different signals to one place I believe, but I’ve never used it for this purpose.<span> </span>As far as connections go, you’ve only got ¼ inch connections.<span> </span>There are two for A and B, and an I/O port as well.<span> </span>The box has two foot switches – one to choose between A and B, and one for having both at the same time.<span> </span>It can be powered by a standard nine volt power supply.<span> </span>I don’t find that using the unit is hard at all, and I can’t imagine that anyone would since it is such a basic piece of equipment.<span> </span>I’ve never had a desire to seek out a manual, and really don’t think that anyone will be needing one anyway.<span> </span>This won’t color your sound at all, and doesn’t make any sound on its own.<span> </span>I didn’t have a problem with noise or anything like that either.<span> </span>The price of the unit is about right for something of this type, and really won’t cost you all too much money at all.<span> </span>If you’ve got multiple amps or multiple signals, and want to send one signal to them, this is a reasonably priced A/B box that is worth a look into.