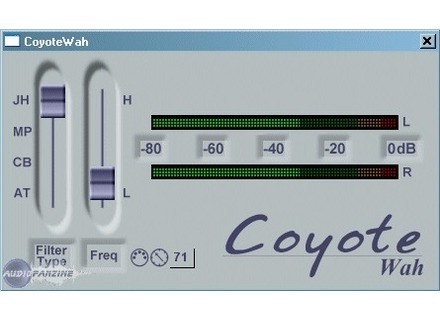 2066 & then's review (This content has been automatically translated from French)

Coyote Electronics Coyote Wah 1.1 [Freeware]
2
No pb installation: copy the dll in the VST directory.
No incompatibilities encountered.
No configuration, except the choice of heading MIDI controller (CC).
No manual, but not required.

I use it for a few months, quite timely.

The sound is correct. I have used on an organ saturated, so with particular sounds, so I can not say objectively whether the emulation is realistic. Especially as the race of my expression pedal is not the same as my Cry Baby.

A serious limitation: when one moves from low to high filtering, tone "follows" the movement of the foot (quick action leads to rapid variation, normal, whatever). However, the transition from acute to severe filtering is limited in speed (if I set foot in one fell swoop to a stop grave, the sound is going to 1/2s to enter serious filtering, which is not cool).

If someone does not encounter this problem, I'm interested, because the rest is a good plugin, but this feature makes it virtually unusable in many cases. Too bad.

Well, it's free, maybe the commercial version does not have this limitation ...
Did you find this review helpful?yesno
»