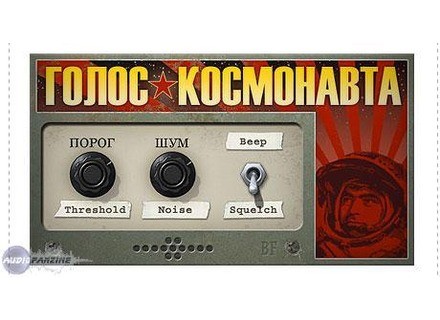 Bomb Factory COSMONAUT VOICE
4
I didn't have any compatibility or other issues pertaining to the installation of the Bomb Factory Cosmonaut Voice plug-in for Pro Tools.  It was a quick process and the interface of the software is just as easy to figure out.  You simply have parameters in the form of knobs for threshold and noise and a switch to choose between either beep or squelch.  Since this is a lo-fi plug-in, parameters usually aren't articulated all that well because they aren't easily explained, but this one does a better job than some of the other ones out there.  I've never seen the manual for the Bomb Factory Cosmonaut Voice plug-in, but this is easy enough to figure out on its own that one isn't necessary.

The Bomb Factory Cosmonaut Voice is a plug-in that won't take up much processing power at all and for this reason it can be run on pretty much any Pro Tools system that can adequately handle Pro Tools.  I'm running the plug-in on a Mac Book Pro lap top that has a 2.2 Ghz Intel Core 2 Duo processor and 4 GB of RAM and I run Pro Tools LE 7.4 with a Digi 002R audio interface.  I'm able to run this plug-in without any issues at all within this configuration, even if I don't use this plug-in all that often...

The Bomb Factory Cosmonaut Voice plug-in will definitely do the job that it advertises as it is capable of getting a variety of lo-fi type sounds ranging from radio sounds to spacey sounds.  The range of sounds possible isn't all that wide, but if you are looking to lo-fi up your sound a bit, this plug-in will definitely do the trick.  The only problem I have with the Bomb Factory Cosmonaut Voice plug-in is that I feel it should be a bit cheaper.  Other than this, the plug-in is nice to have around as you never know when you might want to make something sound worse than it does!