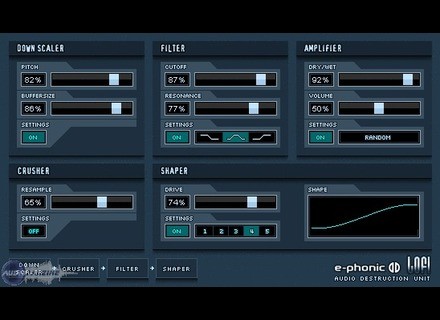 All user reviews for the E-Phonic LOFI [Freeware]

E-Phonic LOFI [Freeware]
5
E-Phonic's LoFi plug-in is a piece of freeware that comes in VST format. I'm not currently running this on my Pro Tools system, as this is a plug-in that I used in Cubase before I switched over to Pro Tools. As far as downloading and installing the plug-in goes, this whole process shouldn't take very long at all. It's a simple task and I don't think that most users will have a problem with it. The interface of the E-Phonic LoFi plug-in is fairly simple, but it does have a good amount of control, especially for a free plug-in. It's got sections for 'down scaler,' filter, amplifier, crusher, and shaper. Each has a few different sliders to control your sound, and you can actually place them in a whatever order you would like in terms of your signal chain. I don't think that you'd be able to find a manual for this plug-in, but one isn't necessary anyway.

When I ran Cubase SX, I ran the E-Phonic LoFi plug-in in it, but no longer do so since I now run Pro Tools. Although I have the Fxpansion VST to RTAS converter for Pro Tools, I haven't gotten around to converting this VST plug-in to be used yet, as I haven't found a pressing reason to do so. Having said this, when I ran it in Cubase it always ran smoothly without hiccups or other problems. The computer that I was running this plug-in and Cubase SX 2.0 on was a Hewlett Packard Pavilion dv8000 lap top with a 3.0 Ghz processor and 2 GB of RAM. I was running the system with a MOTU 896 HD interface as well. I can't recall ever having an issue running this plug-in, as it didn't seem to take up much processing power at all. Also helping was the fact that I never needed to run more than one or two of these at a time.

E-Phonic has a whole slew of free VST plug-ins like LoFi that I had in my Cubase SX suite. While these plug-ins were definitely useful for me at the time, they aren't the best plug-ins in a world, which is something you should always expect from free plug-ins anyway! However, if you are running a platform that runs VST plug-ins, I really don't see a reason not to at least download this plug-in and try it out for yourself. It definitley came in handy for me when I had it.
Did you find this review helpful?yesno
Cookies help us improve performance, enhance user experience and deliver our services. By using our services, you agree to our use of cookies. Find out more.