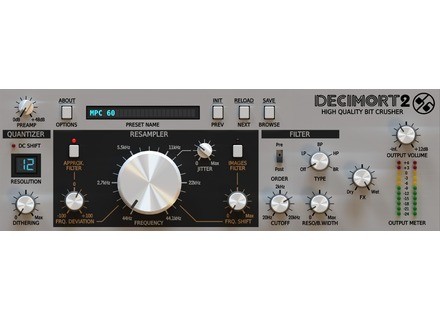 All user reviews for the D16 Group Decimort 2

Average Score:5.0(5/5 based on 1 review)
Audience: Anyone Value For Money : Excellent
Buy this productView price information >
Not satisfied with those reviews?
Our members also liked:
Buy at Plugin Boutique

laurent BERGMAN's review"Decimate at will"

Installs easily through an executable, authorization is processed with the keyfile which is available for download at your user account on the developer's website. The keyfile must be used within 72 hours after downloading.

The English manual is clear and detailed, including technically.

What we have here is a stereo bitcrusher with a decimator unit coupled with a multiband filter section. Algorithms are of the highest quality: paradoxically, degrading the sound is done cleanly.

I find it great for Lo-Fi treatment especially for vocals and drum loops, which are the kinds of materials on which I use it most.
It's also efficient to get the type of sounds you get from old samplers, and great to make pads or basses dirty for instance. The factory presets are numerous and cover many bases.

GUI is simple and intuitive, as usual. Now you can change its size ("Options" menu in the "GUI3 tab) - a feature that will be extended to all D16 Silverline series plugins.

Regarding the changes from v1, independent channel treatment was suppressed (something I actually don't miss at all). But now, the "Dithering" control is integrated, and the resampling section was deeply changed. It now has new features such as a "Jitter" parameter, two resolution modes and two new filters (which replace the AA LPF): an "Approximative Filter" which filters the pre-resampling harmonic content, and "Images Filter" which filters the signal post-resampling to avoid aliasing (regarding the resolution and details on the "Resampler" module filters, see the manual about the "Mid-Thread/Mid-Riser" quantization modes). I'll admit the approach is very interesting. This version 2 allows to experiment much further.

So the GUI differs a lot from v1's, but its excellent ergonomics makes it easy to start using. D16 also seems to pay more attention than before to the way their plugins look (like Antresol and Devastor 2), the GUI il less austere, more contrasted and colored, making it more pleasant to use. The GUI's big size also makes things easier (user can choose from two sizes, actually).

Now we start with a "Preamp" (0 to 48dB), then a "Quantizer" where the resolution of the degradation applied to the signal is determined, the choice of quantization mode through the "DC Shift" LED (Mid-Thread or Mid-Riser mode), and "Dithering". The "Resampling" section has several resampling setting controls including frequency (44Hz to 44.1kHz), "Jitter" and the new "Approximative Filter" and "Images Filter".

Then there's the section with the multiband filters, featuring the same filter types as in the previous version (LP/BP/HP/BR) but with a wider sweep than before (20Hz to 20 kHz instead of 14Hz to 12 kHz), based on analog models with adjustable resonance setting that can be (like in v1) pre- or post-decimation. The "Reso/B.Width" selector has different actions depending on the selected filter, it controls filter resonance for lowpass/highpass and the filter's bandwith for bandpass/band-reject. Finally, there are output settings with the dry/wet balance and output level.

The preset browser was also redesigned, it is now tag-based. You just select the effect type categories and the corresponding presets appear at the bottom of the window. When creating presets, once they're saved, you just go to the "Edit" tab, select a preset and click on the category you want (the "*" symbol appears, signifying the preset is now tagged). You can also export several presets at once to a .zip file, avoiding to go to the HDD's browser to get all these files (eg for a backup) then reimport them on another computer. Conceived with a new architecture, the preset manager also allows importing proprietary .d16pkg preset banks.

The plugin can also be inserted on an instrument track as a MIDI-controlled effect.

The "MIDI learn" function was also revamped compared with version 1, assigning the MIDI controller now only takes a right click on one of the plugin's settings and the assign window pops up, while using the down arrow the menu window gets extended. Regarding the AU version, only the MIDI-controlled effect has the necessary MIDI ins. In a "traditional" plugin use, you'll have to use Logic Pro's internal MIDI Learn (cmd + L).

Another option I asked for during betatesting was added, it regards those using a single-button mouse or a laptop with an old trackpad witout a right-click (I still have a 15" macbook pro from 2010): it only takes pressing the "shift" key while clicking on a parameter to access the context menu, as I thought it was a pity such an opportunity would be unavailable to some users.

It is also important to mention that you can't import presets created with version 1.

As usual, I wanted to develop all features as much as possible. As a beta-tester with a already a significant experience with this product, this is somehow more of a bench test than a real user review strictly speaking.
Buy at Plugin Boutique
Did you find this review helpful?yesno
Cookies help us improve performance, enhance user experience and deliver our services. By using our services, you agree to our use of cookies. Find out more.