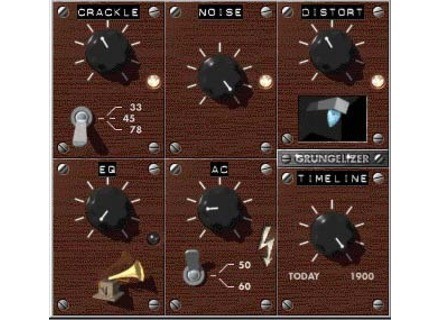 All user reviews for the Steinberg Grungelizer

Steinberg Grungelizer
4
Steinberg's Grungelizer is a free lo-fi/vinyl plug-in that I used to run in Steinberg Cubase SX 2.0 and Cubase SX 3. I don't know what type of plug-in format this comes in, or really even where to get it now, but a few years ago I used to run it. I don't know if it is compatible outside of Steinberg based products, but I would assume not. I don't remember if this plug-in was already installed with Cubase, or if I had to install it separately. The interface of Grungelizer is pretty simple, as it consists of knobs for crackle, noise, distort, EQ, AC, and timeline. The crackle has a switch for you to choose what type of record you want it to sound like - either a 33, 45, or 78. The AC has as switch to go along with it as well, and the timeline ranges from 'today' to '1900.' A manual isn't necessary at all here...

I'm no longer running Steinberg's Grungelizer plug-in since I now run Pro Tools instead of Cubase SX. However, when I did run it I ran it on a Hewlett Packard Pavilion dv8000 lap top with a 3.0 Ghz processor and 2 GB of RAM. I don't remember ever having an issue running this plug-in within this rig, but I definitely never used more than one or two of them at a time as this isn't the type of plug-in where that would be necessary. Usually I would just put it on the master channel to give a whole song a vintage feel, and this never taxed my system much at all.

Steinberg's Grungelizer plug-in is overall a very interesting one, that will undoubtedly draw comparisons to iZotope's Vinyl plug-in since it is basically used for the same thing and has a lot of the same parameters. While I prefer iZotope's version of the plug-in (both are free) since it is fully compatible with most DAWs, both plug-ins will pretty much do the same thing. Really the bottom line is whether you're running a Steinberg DAW or another one, because if you're not running Steinberg's Cubase or Nuendo I don't believe you'll be able to run this plug-in anyway, in which case I'd recommend going with Vinyl...
Did you find this review helpful?yesno
Cookies help us improve performance, enhance user experience and deliver our services. By using our services, you agree to our use of cookies. Find out more.