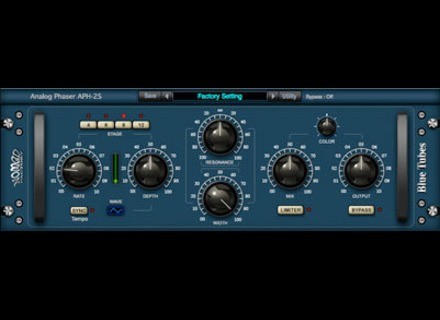 The studio has the Nomad Factory Blue Tubes Analog Phaser APH-2S and the full Blue Tubes Effects Pack running on all of our systems. We have a bunch of studios on site here, all of which are Pro Tools HD based, with the main room running everything with a Mac Pro computer with dual 2.66 Ghz Intel Xeon processors, and 10 GB of RAM. I've never needed to run more than a single instance of this plug-in at a time, so needless to say that Pro Tools HD could handle it...

The Nomad Factory Blue Tubes Analog Phaser APH-2S is becoming one of my favorite in the box phasers to use for getting thick and realistic sounding phasing. I like how much control you've got here as well, as usually you won't find this many parameters on a phaser. The other plug-ins in the bundle are worth exploring for sure, especially the price, but this one has been the most useful to me thus far...