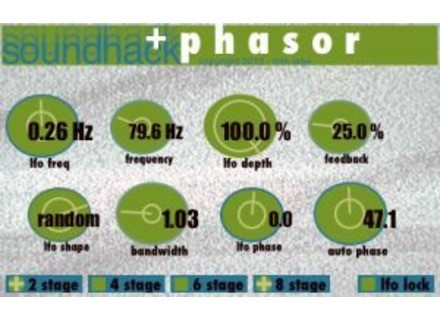 Soundhack +phasor
4
The Soundhack +phasor is a newer free plug-in for Mac systems that can support VST plug-ins. Right now it's only available in this format, but on their site it says it will sometime be available in other formats as well. I only tried out this one in the last month or two, as I've got all of their other freeware plug-ins on my system already. I'm running this in Pro Tools 9, but you'll need the Fxpansion VST to RTAS converter if you want to do this sine it's only available as a VST plug-in. If you do have a compatible system, it's very easy to go right on Soundhack's site to download and install the plug-in, as the whole process shouldn't take very long at all. Learning the interface of the plug-in is about as easy, as it just consists of a series of parameters that shouldn't be unfamiliar to those who have used phasers before. The LFO has parameters for frequency, shape, phase, and depth, and there are other parameters for frequency, bandwidth, feedback, and auto phase. There's no manual made for this plug-in.

My system at home that I'm running the Soundhack +phasor is a Pro Tools 9 based system. You can't currently run this plug-in in Pro Tools unless you have the aforementioned VST to RTAS wrapper as I've got, but hopefully soon they'll have this in all plug-in formats. The computer I'm running everything on is a Mac Book Pro lap top that has a 2.2 Ghz Intel Core 2 Duo processor and 4 GB of RAM. I run Pro Tools with a Digi 002R audio interface as well. This plug-in takes up just about the smallest amount of processing power possible, and it's free anyway so even if you think you're system won't take, you might as well try.

While certainly not the best sounding plug-in phaser in the world, I wasn't expecting that from the Soundhack +phasor. It's free, and in general I try not to expect too much from freeware as I'm just happy to be getting it free in the first place! You can actually do a good amount with this plug-in, but the overall sound quality isn't the greatest as I find that anything more than subtle phasing isn't ideal with this. You may as well try the plug-in for yourself if you're still reading this review, as even though I haven't used it much since trying it, others who may not have as many options in their plug-in suite already will probably use it more than I. At the price of free, there's no reason not to give it a whirl.
Did you find this review helpful?yesno
»