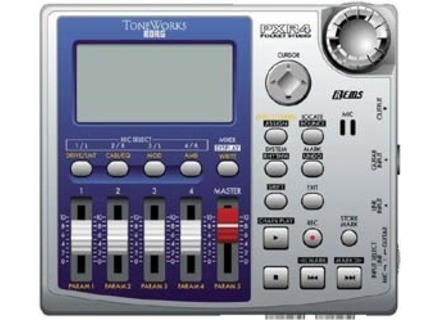 Korg ToneWorks PXR4
5
The PXR4 came from Musician's Friend for about $400. I got it for sketching out songs and solos quickly, and as a rehearsal tool.

The PXR4 sounds great. It has a built-in condenser mic that works wonderfully for both voice and acoustic guitar (no, it's not like having a great studio mic running through a Neve pre-amp, but come on...). The built in guitar effects are okay--for my stated purpose of quickly getting song ideas sketched out they're perfect, especially the "bass" simulator--I can get a bass track down without changing anything but the effect. The built in rhythm tracks are also great, at least as a tool. No, you wouldn't make a record with them, but they get the idea across (plus, you can turn them off, unlike the drummer in your band...).
The size of the unit is great, too. I wanted a digital unit that I didn't have to set up a studio for--space is at a premium in my house, and this works great: My wife's discman takes up more room.

I'd refer to these as reservations about the PXR4, not really dislikes. This is my first foray into digital recording of any sort, so I'm pretty slow at understanding all of the options involved. That said, the small space of the unit makes it understandably difficult to access some of the options. The faders are a bit sensitive, and it's easy, if you're inattentive, to get your recording level too low (switching between pre and post-fader levels takes pushing a few buttons) Also, the guitar effects, which I praised above for there efficiency in quickly redording songs, are actually a bit cheesy, and sometimes difficult to manipulate. Of course, that's why you get a Line6 POD, I guess. Most of this, though, reflects more on my lack of digital sophistication than on any real problems with the unit.

Quality is good, though I'll have to admit that it does feel a bit flimsy. It's so small that it always catches people off guard when they see it. It's just so lightweight that it's difficult to believe that it'll be as good as it is. The LED screen is great--it's actually bigger than the one on the Boss BR-532 4-track, which is about twice the size of the Korg.

This unit is great--I'd absolutely get one again. The other great thing about it, considering the price and the fact that it's only a 4-track, is that I know I'll feel no guilt when it comes time to upgrade to a recording unit with more tracks and such. In essence, this does exactly what I wanted it too in allowing me to throw down song ideas quickly, and not take up much room. I can't believe what is all packed into this little thing.

Fabrixe's review (This content has been automatically translated from French)

Korg ToneWorks PXR4
4
Hello,
not notice ... a feeling ... one feels the hen before a knife ... !!
thank you to the owners experiments, to give me a hand, in part against
the model of our future studio cd ... (fans RENAUD: guaranteed fun ..)

Fabrice
Did you find this review helpful?yesno
»

Korg ToneWorks PXR4
Sorry for the delay response.
I always use this device (it's been 7-8 years although I have). I perform with rehearsals, and also by myself when a thought strikes me. It happened to me to save the train as it works with battery. No reliability problems, it has not moved since the beginning. When I show records repeat it because I have not adjusted the volume. Some bugs sometimes with my mac to eject it, but I never lost data because of the device. After, I'm using that with the microphone, I do not register with me directly connecting in with my guitar. I did, it might help, but it is not functional at all ...
That's eje can say that, but it is probably nothing more, see my response time .. dsl

Edamuas's review (This content has been automatically translated from French)

Korg ToneWorks PXR4
4
Connectivity enough complte, but I would have more apprci a line out Stereo Phono ...
Capacity of the original card maximum reasonable and interesting possibilities in quality lasts max.
32 kHz sampling too low, a whistle APRS conversion to mp3?? is it a li?
Number of tracks trs enough for me!
Great effects, good quality headphones.

Ergonomic controls bad enough: you really read the manual several times, and yet! Compltement dense arrangement of the keys, logical menus dconcertante!
USB transfer to PC without difficulty.
The software conversion mp2 to wav or mp3 is not provided, it must be to download.
Reduces size, easy toting.
Battery life low (ten hours).

I've had one month, bought used, and I do not regret my purchase. I am far from having exploited its full potential.

Did you find this review helpful?yesno
»
Read the 9 user reviews on the Korg ToneWorks PXR4 »