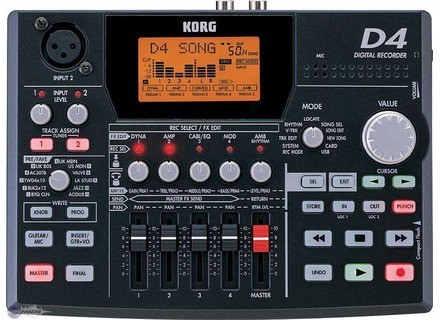 Korg D4
4
The Korg D4 is a four track digital recording device with some pretty simple effects that are built into it. Its not really a pocket recording device though. Its just too big to carry in your pocket, but if you have a book bag or a larger purse you can certainly carry it around with you. You can record two tracks at a time, its sort of like having a multitrack recorder with you wherever you go. All of the info is stored on a CF card because it has no built in hard drive to safe stuff on which I think is a downfall. It should have atleast some sort of a small built in memory so you can save stuff on it, most similar devices do have one but this one doesn’t.
The interface of the Korg D4 is the selling point, there really isn’t anything going on that you cant see right from looking at the front of the device. Forget all of the submenus that most devices have because they arent in the Korg D4. You can also plug in a footswitch and use it to be a trigger. With the style of effects that it has is mainly for a guitar player though, if I would have known that before purchasing I wouldn’t have gotten it, I am not a guitar player at all. Which is why I ended up reselling it back to the store because I kept it longer than 90 days and could get a full refund.

But the Korg D4 has the must an solo buttons that you ned to really get to work on it, if you are a guitarist this is perfect for you to be able to record almost anywhere. It has everything that you need, But like I said keep in my it’s a flash memory card. So if you don’t have one of those you will need to get one or this device will be useless for you.
Did you find this review helpful?yesno
»

Korg D4
5
I've had it one month, but dreamed about it for 10 years. In a couple of minutes all the tunes I wrote with my acoustic guitar became real songs. I even bought a bass guitar to round them off. Pros: ease of use, sound (I love the Vox AC30 simulation). For the time being, the only con is that the first track is selected by default and I always forget to deactivate it. Unbeatable value for money. The USB connector is great: you can quickly create an MP3 file with Audacity. Only major drawback (because of which I'll have to buy a drum machine): the rhythm section doesn't allow you to create a real song since you can change neither the pattern nor the tempo within a song.

Update 9/3/2008
After two years of use I'm still very satisfied with it, but I discovered some problems:
- The indications on the housing are now unreadable...
- Sometimes the guitar input doesn't work and then it works again after a while, etc. I haven't found any tip in the manual or on the web on how to solve the problem...

Originally written by pierre_esc on Audiofanzine FR.
Did you find this review helpful?yesno
»

guitavi's review (This content has been automatically translated from French)

Korg D4
I have a Korg D4 acqurir but despite the manual, I can not save myself (guitar and voice). There was perpetually whistling; could someone help me? Thank you in advance
Did you find this review helpful?yesno
»

gregasshole's review (This content has been automatically translated from French)

Korg D4
4
Considering the price c of very good quality and it is DETAILEDREPORT in a handkerchief
pti just a trick namely the Korg records to mp2 format and I want to know kel mix for software works with this format or Alor is there a converter in both directions: MP3 / MP2
Did you find this review helpful?yesno
»
Read the 24 user reviews on the Korg D4 »