How to get the levels "just right"

One of the questions that I get asked fairly often by neophyte recording enthusiasts is "how hot should I record?" The amount of signal you record per track can have an effect on not only the sound of that individual track, but on the overall mix of all tracks as well. There are definitely some misconceptions floating around out there in terms of just how high recording levels should be, so let's dig in and have a look at just how to set things up for best results.

There are two main line-level “standards” you’re likely to run into: –10 dBV, which is the consumer or “semi-pro” standard, and +4 dBm / +4dBu, which are the professional standards. Each uses a different reference point for “0 dB”, so the math isn’t as simple as a straightforward 14 dB difference between the two, but +4 is definitely “hotter” than –10, so it’s important to always use the correct levels when connecting things. +4 outputs should always be used with +4 inputs, and –10 outputs should always be used with –10 inputs. Many hardware devices either offer separate jacks for both types, or have a switch that lets you choose between levels, so always make sure you’ve matched them up correctly or you’ll have a heck of a time getting your levels right. XLR and balanced 1/4" jacks are commonly used for +4 dBu line level inputs and outputs, while unbalanced 1/4" and RCA jacks are more commonly used for –10 dBV line level input and output jacks. The main and monitor outputs from your audio interface are also typically line level outputs.

The other common input type is the mic input. Mic inputs are usually on XLR jacks. Mic level inputs are designed to accept the output from a low impedance microphone, and are nearly always associated with a built-in microphone preamp. Typical mic levels – the output of your microphone – run in the –60dB range, but need to be raised much higher than that before we can record it. That’s the job of the mic preamp. Typically they can add anywhere from 40 dB to 70 dB or more of gain to the signal, depending on the design of the preamp and the level you have the preamp’s gain knob set to.

If the sound is exceptionally loud at the source, you could overload the microphone. In these cases, you can move the mic further back from the sound source, or engage the microphone’s pad switch if it has one. Most modern mikes either have pad switches or can handle fairly hot levels, so often it’s not the mic distorting. More often, when the signal from the microphone is too “hot”, it can overload the mic preamp’s input, causing it to distort. Again, the pad switch on the mic or mic preamp is typically used to compensate for this.

Other Devices in the chain

One of the best things you can do when setting up (or having problems) is to simplify your signal path. Don’t put it into the chain unless you really need it. The fewer things you use, the less noise you add, and the less likely you are to misadjust something. That means that if you don’t absolutely need a hardware EQ or compressor, take it out of the chain! However, sometimes you do need to EQ the signal you’re recording, or want to compress a  signal with a large dynamic range. These devices are typically added after the mic preamp and before the audio interface, or used as channel inserts if your mic preamp or audio interface has those connections. The gain staging is the same. The mic preamp needs to send sufficient level to the compressor or EQ to give it enough signal to work with, but not so much as to overload it. These devices usually have an output gain control that will allow you to adjust the level you send out from them to the next item in the chain. This is especially important with compressors, since compression tends to lower signal levels and requires a make-up gain stage to compensate.

Unfortunately, one of the most common issues I see when dealing with tracks that were recorded by neophytes is the levels slammed nearly to the point of clipping. I’m regularly amazed by just how hot many people record their tracks, and it’s not only unnecessary, it’s actually counter-productive.

DAW meters lie quite often. They can miss inter-sample peaks and not always accurately reflect when clipping occurs. For this reason, you should always leave at least a dB or so of headroom below clipping. I typically get uncomfortable if I see my meters peaking past –3dB, and I never want to see the red CLIP meter illuminate. But you really don’t need to have your levels that hot. In fact, most DAW software is calibrated so that the equivalent of “0 dB” on analog VU meters correlates with anywhere between –20 dBFS and –15 dBFS on the DAW’s meters. Yup – that’s right – the level you’re shooting for should be in the –15dB range on average, not up in the –3dB range. If your DAW meters don’t have calibration marks, –15 dBFS is normally somewhere in the middle of the meter’s range on most DAW programs, not up near the top of it. I can’t emphasize this strongly enough – if you’ve been slamming those levels and pushing those meters to the top when you record, switching to –15 dBFS as your target recording level will make a huge improvement to the sound of your DAW recordings and mixes!

Have a look at the Pro Tools meters (above). The track labeled Audio 1 is at –15dB, which is the equivalent of “0 VU” in Pro Tools. This is about where your average signal levels should be when recording. Notice how Audio 2 is one dB hotter at –14, and has illuminated one of the yellow LEDs on the meter. This is analogous to +1dB on an old analog VU meter. Audio 4 is showing 0 dBFS, the maximum signal level that you can record without clipping.

The cumulative results of recording too hot are also visible in that screen shot. Notice how the Master output meters are “into the red” and clipping. This is due in large part to the excessively hot recording level of Audio 4 – combined with the other three tracks, it’s enough to clip the stereo output bus unless we add compression or start lowering faders and levels.

Hooking everything up and setting levels

Here’s a basic guide to hooking up and setting your levels. 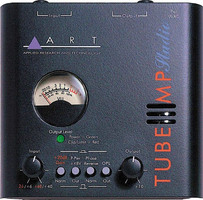 If the external mic preamp has two gain knobs, it can be a bit trickier to dial it in. The design approach taken varies from model to model, but many have a input gain range knob, and then a second knob for output adjustment, such as the controls found on the ART Tube MP series mic preamps. These need to be balanced properly. Typically the gain range control is used to get it into the ballpark, and the output control used to fine-tune the signal level.

It’s already been tracked too hot – Now what ?

What to do if you’re handed a bunch of tracks to mix that were recorded way too hot? While there’s not much you can do for actual clipped waveforms, you can still lower the level of the tracks enough to put them into the optimal gain range to allow yourself the use of plugins and processing without risking overloading the output bus. Just add a trim plugin at the top of each of the DAW’s mixer channels, and use them to pull the levels down to the optimal average range (between –20 and-15 dBFS), and then mix as you normally would. Even with optimal tracking levels, you may find using trim plugins helpful in optimizing your levels when you go to mix, especially on larger sessions with lots of tracks that will have to be summed (added together) to create the final stereo mix.

This article was originally published on Harmony Central.  Reprinted by permission.