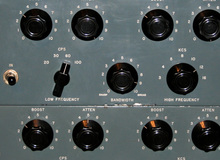 Whether for Recording or Live Performance, the Right EQ is Crucial

Equalization is one of the most important and powerful tools in the recording enthusiast’s arsenal, yet too many people adjust equalization with their eyes – not their ears. For example, one time after doing a mix, I noticed the client writing down all the EQ settings I had made. When I asked why, he said it was because he liked the EQ and wanted to use the same settings on these instruments in future mixes.

Wrong! EQ is a part of the mixing process; just as levels, panning, and reverb are different for each mix, EQ should be custom-tailored for each mix as well. But to do that, you need to understand how to find the magic EQ frequencies for particular types of musical material, as well as what tool to use for what application.

There are three main applications for EQ:

EQ can fix a variety of problems, and the tool of choice is usually a parametric equalizer, which consists of a limited number (typically 1-8) of frequency bands (Fig. 1). For each band, you can change not just the degree of boost or cut, but also the frequency at which this boosting or cutting occurs, as well as how wide a range of frequencies is affected – from very sharp to very broad. (“Pseudo-parametric” equalizers omit the bandwidth control, and the lack of this can seriously hamper the experienced EQ aficionado. Arguably, manufacturers err on the side of too narrow a fixed bandwidth, which makes it difficult to do subtle changes.)

As one example of how you’d use a parametric EQ, slicing a sharp notch at 60Hz (50Hz in Europe) can knock hum out of a signal; trimming the high frequencies can remove hiss. Another common problem is an instrument with a resonance or peak that interferes with other instruments, or causes level-setting difficulties. Following is a procedure that takes care of this situation.

Several years ago I produced an album by classical guitarist Linda Cohen (Angel Alley, which was re-released on CD). She had a beautiful instrument with a full, rich sound that projected very well on stage, thanks to a strong body resonance in the lower midrange that caused a major level peak. However, recording was a different matter from playing live. If levels were set so the peaky, low frequency notes didn’t overload the recording media, the higher guitar notes sounded weak by comparison.

Although compression/limiting was always an option, it altered the guitar’s attack; while this effect might have gotten lost in an ensemble, it stuck out with a solo instrument. A more natural-sounding answer was to use EQ to apply a frequency cut equal and opposite to the natural boost, thus leveling out the response. But there’s a trick to finding problem frequencies so you can alter them; the following works like a charm.

This technique of boost/find the peak/cut can help remove midrange “honking,” strident resonances in wind instruments, and much more. Of course, sometimes you want to preserve these resonances so the instrument stands out, but many times applying EQ to reduce peaks allows instruments to sit more gracefully in the track.

Digital workstation EQ, as found in hard disk recording systems, can be particularly effective due to its precision. In one of my more unusual projects, I needed to remove boat motor noise from some whale samples. Motor noise is not broadband, but exists at multiple frequencies. Applying several extremely sharp and narrow notches at different frequencies took out each component of the noise, one layer at a time, until the motor noise was completely gone.

This type of problem-solving also underscores a key principle of EQ: it’s often better to cut than boost. Boosting uses up headroom; cutting opens up headroom. In the example of solving the classical guitar resonance problem, cutting the peak allowed for bringing up the overall gain to record a much higher overall level.

The same technique of finding and cutting specific frequencies can also eliminate “fighting” between competing instruments. For example, while mixing a Spencer Brewer track for Narada records, there were two woodwind parts with resonant peaks around the same frequency. When playing en ensemble they would load up that part of the frequency spectrum, which also made them difficult to differentiate. Here’s a workaround:

Both instruments will now sound well- articulated, and because each peaks in a different part of the spectrum, they will tend not to step on each other.

EQ can also change a sound’s character – for example, turn a brash rock piano sound into something more classical. This type of application requires relatively gentle EQ, possibly at several different points in the audio spectrum.

Musicians often summarize an instrument’s character with various subjective terms. The following correlates these terms to various parts of the frequency spectrum (this is, of course, a very subjective interpretation).

Fig. 2: The midrange is  reduced somewhat around 500Hz, thus making the high and low ends of the  spectrum more prominent.

For example, to add warmth, try applying a gentle boost (3dB or so) somewhere in the 200-500 Hz range. However, as in the previous case, remember that if possible, cutting is preferable to boosting – for example, if you need more brightness and bottom, try cutting the midrange rather than boosting the high and low ends (Fig. 2).

Problem-solving and character-altering EQ should be applied early on in the mixing process, as they will influence how the mix develops. But wait to apply most EQ until the process of setting levels begins; remember, EQ is all about changing levels – albeit in specific frequency ranges. Any EQ changes you make will alter the overall instrumental balance.

Another reason for waiting a bit is that instruments EQ’ed in isolation to sound great may not sound all that wonderful when combined. If every track is equalized to leap out at you, there’s no room left for a track to “breathe.” Also, you will probably want to alter EQ on some instruments so that they take on more supportive roles. For example, during vocals consider cutting the midrange a bit on supporting instruments (e.g., rhythm guitar) to open up more space in the audio spectrum for vocals.

Finally, remember that EQ often works best when applied subtly. Even one or two dB of change can make a significant difference. However, inexperienced engineers often do something such as increase the bass too much, which makes the sound too muddy, so they increase the treble, and now the midrange sounds weak, so that gets turned up...you get the idea. One of your best “reality checks” is an equalizer’s bypass switch. Use it often to make sure you haven’t lost control of the original sound!