EQing Tools of the Trade

Now that we have analyzed EQing during mixdown, let's talk a bit about the tools capable of carrying out the task. 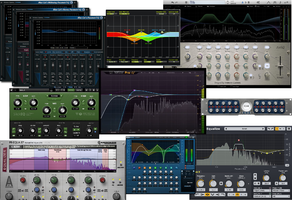 If there is one single category in the audio plug-in world that is overcrowded, it's definitely EQs. There are so many choices that beginners often have a hard time finding their way among them. And yet, chances are, your DAW already has what you need in this regard! Indeed, the EQ plug-ins that come with your sequencer will most certainly do the trick. I've sometimes mixed songs using only my DAW's built-in plug-ins just for the sake of it and the result never made me blush. So, now you know better: Built-in plug-ins ≠ useless crap. However, I won't deny that there are other "details" to take into consideration, nor that, in terms of workflow, they are not always the panacea.

As a consequence, I will name several EQ plug-ins which I think are up to the task. By no means do I claim this to be the ultimate list, so take these suggestions with a grain of salt and procure yourself the different plug-in demos to make yourself your own opinion.

Let's start with the "transparent" EQs.:

There's something for every budget on this list. I'm pretty sure you'll find an EQ that suits your needs from among them, both in terms of sound and usability. Now, I'll take the liberty to give a special mention to the PR-EQUA 87 by French developer eaReckon, because not only is this EQ effective, but it's also inexpensive and, most of all, it includes a feature that will result extremely useful to neophytes, namely, the display of how it affects this and that instrument across the frequency spectrum, similar to the famous frequency chart we've referred to several times.

Let's move on now to the "musical" or "coloring" EQs.. Once again, the offer is overwhelming and several developers offer more or less faithful virtual versions of legendary gear. In this case it's harder to make a choice because it's all a matter of taste. That said, it might me helpful to know that, for the most part, the products developed by Softube and Waves, as well as the famous Universal Audio plug-ins for the UAD-2 platform, are of excellent quality. Personally, I have a certain fondness for the Elysia museq, which has the advantage that it can have a distinctive color or be transparent. Finally, if you are on a tight budget, I encourage you to take a look at the SlickEQ Gentleman’s Edition. It sounds very good and there is even a free version available, which is obviously limited, but still more than enough to provide a nice color to your tracks.

To finish, I can't refrain from mentioning a plug-in that I recently reviewed for your favorite audio site (the review we'll be available here very soon), which really blew me away: The AirEQ Premium by Eiosis. Developed by yet another French company, it can't be really classified under the "coloring" EQs, because it doesn't generate any harmonics. And yet it's incredibly musical! Furthermore, for once, presets are well thought-out because they don't apply an arbitrary EQing curve by default, instead they suggest you to work on this or that band to round off the body, to add some clarity, etc. Be careful however, because this EQ has a tendency to favor an "additive" approach, which can prove detrimental, as we've already seen. So take it easy and make sure to compensate the changes in loudness.