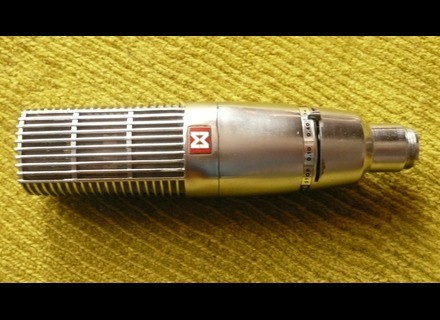 TEDEVODIOFIL's review (This content has been automatically translated from French)

Melodium rm6
5
42B worthy successor, his career has lasted over twenty years. Emerged in the early 60's looking unsightly and tubular initially Mélodium quickly transformed her look beautiful in a tapered micro (square or Greek), who did not look old, with a diameter of 54mm and a height of 165 mm for 540gr.
Specifications: Micro ribbon without phantom power. Impedance: 2 versions, 50 or 200 ohms. More sensitive to 7dB in 200 ohms. Bandwidth at 30 to 18000Hz + /-2dB. Comes in mahogany box it was sold about 370 francs in 1970. Very fragile it is advisable to store and move vertically. It was commonly used in film dubbing studios due to its directivity in dual eight who allowed to use a microphone to two dialogues and its exceptional qualities to highlight the "grain" of the voice.
A 4-position rotary switch on the power play within 3 distances proposed use: Stop, 0.1m, 0.4m,

It's a microphone whose sound quality was just before the very large microphones of the time, the flat, common to all ribbon microphones is due to its very low sensitivity. Impedance transformers and breath tube preamps do not always paid him homage and limited its use.
A friend Supélec engineer, also a friend of Andre Charlin had recorded about 1964 monks Chevetogne disk Orthodox Liturgy edited several times and then vinyl on CD by Harmonia Mundi. Recording made without any correction. This disc still regularly reprinted for judging the excellence of RM6 to highlight the richness of voice. The rest I was fortunate to be able to keep intact the couple who has served in this sound recording.
I continue, among other things, to record with these RM6. With CI at very low noise and very low impedance found today these pickups produce results worthy of the best current pickups especially for vocal and instruments rich in harmonics. No need for preamp tubes, heat is naturally the rendezvous. Depending on the distance sound pickup, however, they may request a small correction at about 8 kHz for perfect linearity. The bass is deep and generous nature: the rare cardioid not to truncate the subwoofer, it's impressive record with a large organ such as the microphones directivity eight double captures the natural reverberation without additional torque.
They are not appropriate for all situations because of their particular directivity. For example, the piano will be a bit heavy, they have a slight tendency to compress fortissimi, the proximity effect is very pronounced, a battery or a slamming door can destroy the tape. Totally unusable outside what would be criminal to exploit them overhead! Their use requires specific training that can be confusing at first.

This microphone, except for the voice is not the ideal tool homestudistes. But many of them have an excellent ear and I wanted to fill a void on this microphone a little forgotten. The RM6 had their time in an excellent value for money. Equivalences exist with ribbon microphones U.S. but at what price! Careful though when buying used, the characteristics can vary profoundly depending on the use made of it. On my 5 RM6 there are very audible differences between them. We must also ensure they have taken the clips and melodium specific.


27 of 27 people found this review helpful

Melodium rm6 manuals and other files