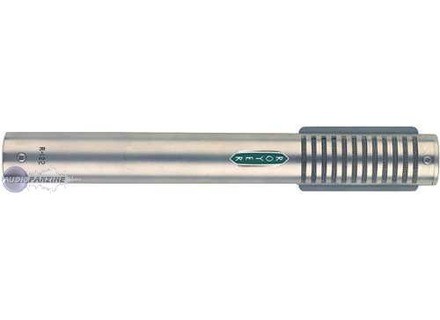 Royer Labs R-122
5
This ribbon mic is made exclusively for studio use due to its incredible clarity and depth as well as its extreme fragility. Arguably the most unique feature of this mic is its reliance on phantom power, which normally destroys ribbon mics but is necessary to power this one. It pays off with a really nice, rich tone that is very useful.

Royer has done a great job here. This mic is one of my favorites. If you like the sound of a particular room and want it to be part of your recording, these need to be a part of your arsenal. I've been using mine for over six months at the studio I work at, and we can't get enough of them over here! I think it's pretty amazing how well they pick everything up. The tone is generally rich and colorful, if not the most accurate representation of the sound. However, that's not really what they are used for (at least not for me personally). I've used them as room mics on drums, pianos, and amps (guitar and bass), and they work wonders to the overall sound. I've also set one up on a piano with two AKG C12s, and I really enjoyed the sound that the combination achieved. One thing that sets them apart from other ribbon mics is that you don't have to be careful about signals being too loud. With most ribbon mics its easy to destroy the ribbon if the signal is too loud. You probably still wouldn't want to put it too close to a snare or an amp just to be safe (and because it isn't really made for that kind of recording anyway.) Also, know that if the mic is dropped or mishandled the ribbon has a very good chance of breaking so extreme caution must be taken. I haven't really had the opportunity to try many other ribbon mics, but the few that I did try didn't come close to this one. They are really expensive but if you're ready to use them they are totally worth it. I would recommend them to any studio owner, or anyone who wants to capture the sound of the room that they are recording in.

Royer Labs R-122
5
Wow. You want this mic. I can already tell you that and I don't even know you! This mic is basically an improved version of the Royer 121. Take all the smoothness, warmth, and pleasing characteristics of the 121 and double it. This mic is the best ribbon mic I've ever heard, and Royer Labs builds them so well that they're just as durable as a small condenser mic. There is a great tolerance for SPL on these mics, so you don't have to be so ginger with them that you're afraid to mic anything other than acoustic guitar with it. I have used this mic on super loud guitar cabinets and it sounded perfect. This mic definitely adds a lot of color to sources, but it is almost always a positive unless you already have something similarly colored in your mix and you get too much masking. If you mic something using the back of the mic, you get a distinctly different timbre, which effectually doubles the sonic possibilities you have at your disposal. I really recommend trying this mic out on lead vocals, especially female singers that have a nice top end. You won't believe how rich they sound through this mic! It connects with a normal XLR cable. This mic also requires phantom power, which is strange for ribbon mics as in the past phantom power could destroy your ribbon.

I don't own one of these, but have been fortunate enough to have worked at a few studios that owned one. I love using them, and am very rarely disappointed with the results. Anything in your mix that you want to sound rich and smooth will benefit by being put through a Royer 122. They are definitely pricey, but it seems to me like it would be a very worthwhile purchase. I plan to get one in the future. Fantastic mic!
Did you find this review helpful?yesno
»